From the top of his back door steps, Joe Rex Sport delivered a beaming smile— the same smile that has greeted Luverne residents for over 50 years.

Sport was born Feb. 17, 1932, in an area a little north of Dozier, Ala. The Sport family moved to Luverne in 1937 after his father, Rex Sport, took a job at the Chevrolet dealership as a mechanic. 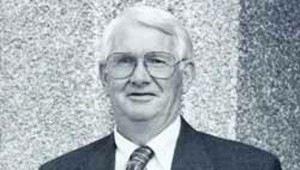 Sport recalls a happy childhood playing with his eight siblings.

“We’d leave early in the morning and go out to play, but we always made it back by lunchtime or mother would be upset,” Sport said.

From the age of 13 until adulthood, Sport had a series of jobs that required him to interact with the community.  “I ran the Montgomery Advertiser paper route for many years, then after high school I went to work at Hamilton’s Grocery,” Sport said. Sport says he also later took a job at Hicks Tackle Company (Hicks Inc. now).

On July 1, 1952, Sport was drafted by the U.S. Army. While visiting Luverne after basic training, he married Barbara Butts. “We were married 35 days and then I received orders to go to Korea, I didn’t see her again for 18 months,” Sport said.

He left his military career in 1954 for a college education. “I attended Troy State Teachers College and majored in history and business,” Sport said. After receiving a bachelor’s and a master’s degree from Troy began an eight year career as an educator.

In the late 1960s, Sport took a job as a broadcast engineer for WSFA. “I’d always been good with repairing and fix things,” said Sport. He says he eventually left WSFA for a principal position offered to at Highland Home. “I made the decision to go back to Highland Home for my family. I’d get to spend more time with my children,” Sport said.

From then on Sport was a servant of Crenshaw County. He served as principal for a little under two years, then headed a federal program for four years, and in 1972 was appointed superintendent. Sport served his position until 1988.

“At 56 years old, I thought I’d retire,” Sport said. “But I decided that I was still too young not to do anything, so I worked part-time as a rural mail carrier. 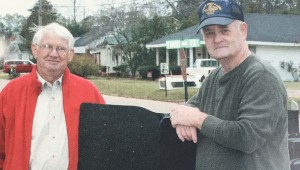 Pictured are Joe Rex Sport and Tommy Odom at the dedication ceremony of the Veterans Memorial Park in 2011.

Sport never saw himself being a part of city government. He says he was asked by former mayor John Harrison to fill a council position after the councilman of his district moved. Sport was a councilman for 14 years.

In 2003, Sport accepted the council appointment as Mayor of Luverne, finishing John Harrison’s unexpired term. The following year, Sport was elected mayor for an additional four years. “I wanted to do something for Luverne,” Sport said. “We obtained the SMART contract and I wanted the city to have some updates- like sidewalks, roads and infrastructure.”

Sport says he has great faith in the future of Luverne. “I hope business continues to prosper and we continue growing in our excellent school systems and medical facilities,” Sport said.

Having spent almost his entire life in Crenshaw County, Sport says he’s still happy here. “I wouldn’t change anything,” Sport said. “I’ve had a good life and a good career.”

Sport doesn’t deem it likely he’ll come out of retirement for a second time.

“I’ve been a public servant for 59 years, I think I’ll serve myself for a while,” Sport said.