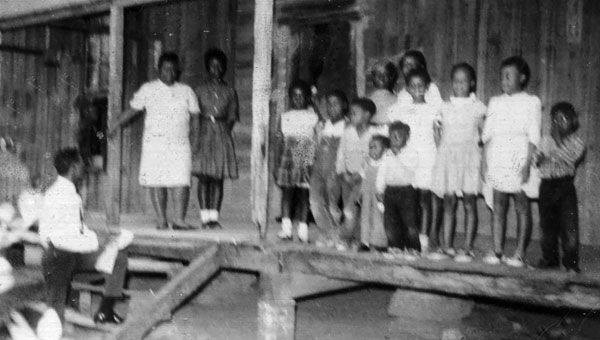 Wilbert and Rosia McGhee had 13 children. The children gathered for a photo on the porch of their family home, which was burned down shortly afterward.

When driving onto the McGhee family’s land, you are met with a dozen homes and people mingling about.

The land is about five minutes from Rutledge’s main street. This land and the people who live there descend from Wilbert and Rosia McGhee. Their children helped integrate Luverne High School.

“There are 13 of us,” said Mary Shackelford, daughter of the McGhees. “Today, seven girls and three boys remain.”

The father, Wilbert McGhee, was a farmer. He owned and farmed two plots in Crenshaw County, said Terrie Bedgood, another daughter of the McGhees. 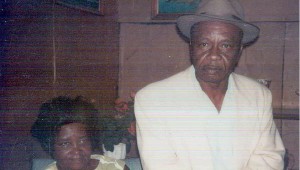 “Our mother was sweet, just awesome,” Bedgood said. “She never met a stranger. A lot of kids in the neighborhood even called her Mother.”

The McGhee children were raised Baptist, Shackelford said. “We were raised to not only love family, but to love everyone and treat people right. We were raised according to Christ.”

During the early 1960s, Wilbert McGhee heard civil rights leader Martin Luther King, Jr. speak, said Myra Smith, another daughter. “He always had a driving spirit, but hearing him speak made him want a better education for his children.” Her father decided to take a stand for equality, Smith said.

“Our house was burned down,” Shackelford said. “We were at church, and someone called and said our house was on fire. When we arrived, a cross was burning in the yard, and the house was ablaze.”

Even the violence didn’t stop Wilbert McGhee from taking his stand, Shackelford said.

“We were the first black students to attend Luverne High School,” Shackelford said. “I was in the seventh grade. We were one of four families who integrated.”

“We were chosen because we were the families who were fighting for integration,” Bedgood said. “There was a lot of protesting, and the National Guard was called.”

“It was hard,” Shackelford said. “No one was promoted that first year, and one of the other families’ boy started that year as a senior. We went from A’s to F’s, but not because we weren’t capable.”

Shackelford, like many, stuck it out and graduated from Luverne High School. Today, she still lives in Crenshaw County. “This is home,” Shackelford said. “I wouldn’t want to be anywhere else.”

Wilbert McGhee died in 1990 of complications from heart disease. Rosia McGhee lived to be 100 years old. She passed away in 2013.

“I think our father is proud of all of us,” Smith said. “We all registered to vote at 18 years old, and we live Christian lives. I think that’ll really please him.”

“Our father always said a name can go a long way, and the McGhee name has done that.”

Shackelford said that “in the future, I hope the McGhees always stay close, and always love each other.”