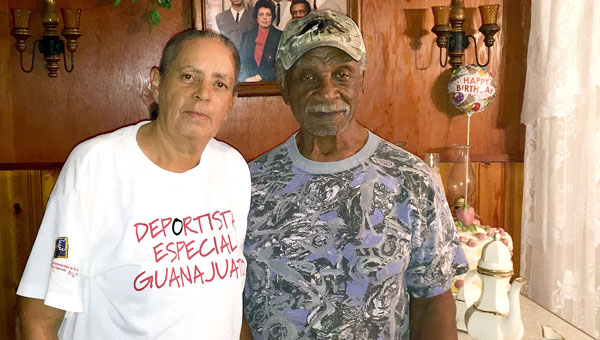 Charlie and Leola Johnson in front of one of their favorite family portraits in their living room.

SPECIAL TO THE JOURNAL: HANNAH KING

“Oh, we’ve been everywhere,” Leola Tisdale Johnson said as she flipped through photographs of vacations she and her husband had taken to Las Vegas, New York, Orlando and Los Angeles.

“We loved to travel, but we always came back home.”

Johnson was born in 1939 to R.B. Tisdale and Lela Lowerie Tisdale in Luverne. Her ancestors have resided there since the early 19th century.

“All her people were born and raised in Crenshaw County,” said Leona’s husband, Charlie Johnson. “Her family’s roots are here.”

Leola met Charlie when he moved to Luverne from Midway, Ala., for a teaching job in 1962, and rented a small apartment from her father.

He began teaching at the vocational school in town immediately after graduating from Alabama Agricultural and Mechanical University, and said that some of his students were only a few years younger than he was. 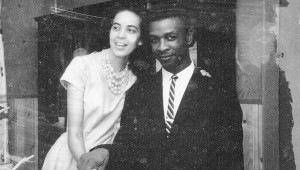 Leola and Charlie Johnson cut into the celebratory cake that Leola’s mother prepared for them on their wedding day.

When the Crenshaw County school system desegregated in 1970, the vocational school shut down and moved to Luverne High School where Charlie taught agriculture for 30 years.

She said she was offered the position of supervisor at the textile company, but she declined the offer.

“The women were enough trouble, you know,” she said.

“There used to be one in every town until they went overseas for cheaper labor,” he said.

In the early 1940s, Leola’s great uncle started Tisdale’s Barber Shop in the front room of his home where Leola’s father, son and grandson served the community.

Leola’s son, Tony, and grandson, Jalen, continue to run the family business in the house where it all began.

“It gives me the opportunity to serve the elderly gentlemen in town,” Tony said.  “It’s a good place for socialization for them.”

Leola’s father was much more than the neighborhood barber. He also rented, renovated and built homes in the area.

“He was a gifted man, her father,” Charlie said.

When they married in 1962, Charlie and Leola resided in the small apartment he rented from Tisdale until he fixed up a house for them in town.

After Leola gave birth to their three sons, they bought land from her uncle and built a house in the country, but they never left the Luverne city limits.

When Leola’s parents passed away and her youngest son graduated from high school, she and Charlie moved into her childhood home, which her father had remodeled.

Charlie said he was willing to make the move because he understood the sentimental value as he maintained his own family’s home in Bullock County.

“Things worked out for me in life,” he said. “I could keep my house, and she could have somewhere that meant something to her, too.”

The small brick house on West Ninth Street holds many memories for Leola. She remembers her mother braiding her hair and preparing a surprise feast for her and Charlie on their wedding day.

“I stay here because it’s home to me,” she said. 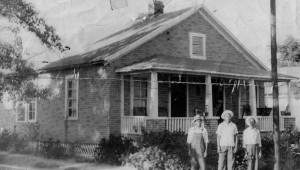 Leola Tisdale Johnson’s grandfather, father and uncle in front of the childhood home where she and Charlie currently live.