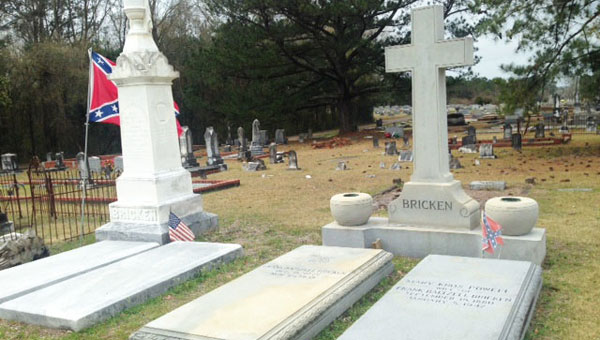 The Bricken family plot is located in Emmaus Cemetery in Luverne, Ala. The Benjamin Bricken Camp of the Sons of Confederate Veterans recently repaired and cleaned the tombstones.

Benjamin Bricken is a man who has meant a great deal to the growth of Luverne, yet in the more than 100 years since his death many residents are unaware of just who he is.

The law office of Lightfoot & Nichols is housed inside the Bricken Building. On the outside of the office there is a plaque that reads “Bricken Building est. 1893.” So who is Benjamin Bricken?

“Benjamin R. Bricken was the first lawyer in Crenshaw County,” attorney Levi Nichols said. “He built this building for his practice, making it the first law office in the county as well.”

Although born in Richmond, Virginia in 1849, Bricken lived in Alabama from the time he was 13 years old until his death in 1905.

“He ran away from home to enlist,” David Coggins, commander of the Benjamin Bricken camp of the Sons of Confederate Veterans, said. “In 1862, he arrived in Greenville, Ala. and joined Company C of the 46th AL Infantry Regiment.”

Bricken was discharged in 1864. He eventually made his way to the Crenshaw County area. “He married Rachel Horn in 1872 and they had four children.” Coggins said.

Coggins says Bricken was very involved with the development of Luverne. “He sold insurance, he was a lawyer, and he was faithful in the church and the community.” Coggins said. 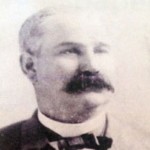 Benjamin Rush Bricken was born in Richmond, Virginia in 1849. Bricken was a lawyer and civic citizen of Luverne, Ala. until his death in 1905.

In 1890, Bricken established Masonic Lodge 48 in Luverne, and in 1893 he established Camp No. 396 of the United Confederate Veterans.  Bricken is also noted as essential to Luverne becoming the seat of Crenshaw County in 1893.

“When the seat moved in 1893 from Rutledge to Luverne, he built this office,” Nichols said.

The Bricken Building was built adjacent to the Crenshaw County Courthouse and remains in the same position today.

Bricken is not a sir name you see much in Crenshaw County any more, but the work of Benjamin Bricken lives on. There is a room dedicated to him at the Luverne United Methodist Church, as well as a great headstone for him in Emmaus Cemetery.

The Luverne Journal’s obituary article of Bricken on Nov. 30, 1905, reports, “Bricken was about 57 years old, a native of Richmond, Virginia, and one of the best men in Luverne. All business houses closed that day and everybody attended the funeral.”