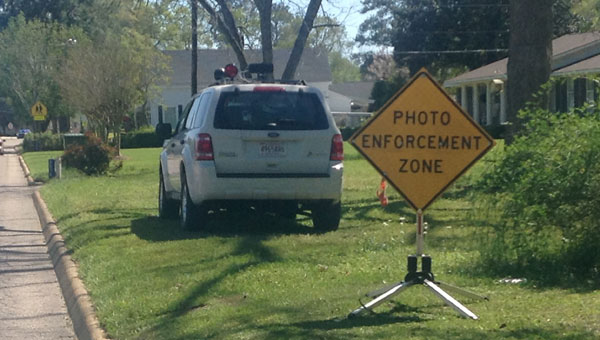 Since the Brantley Police Department invested in a camera and radar REDFLEX system, the number of speeding violations in the town has gone down tremendously.

SPECIAL TO THE JOURNAL: TIAIRRA PARKER

The photographic radar system is currently located on a white Ford Escape parked on the Brantley’s main street in front of the high school. The police department felt the vehicle would be most beneficial in the school zone to prevent speeding while school is in session.

“The crossing guards were having issues getting the students across the street,” said Brantley Police Chief Averett.

“They were concerned that speeders would not slow down.”

The vehicle was a tester to see if the town had a need for traffic control. During an assessment in February, the equipment counted up towards 500 vehicles coming through Brantley at various locations around town.

Since the equipment has been so successful with capturing speeding violations, the police department has decided to get more radars and cameras that will be mounted on poles from REDFLEX.

These devices will be able to captures speed violators in both directions. Brantley Police Department is in the process of obtaining the new equipment and expects to have them in place in a couple of months.

According to their website, REDFLEX Traffic Systems has been helping to reduce crashes and save lives for more than 25 years through an on-going development of new safety products, including speed cameras, red light cameras, school bus stop arm cameras and other photo enforcement solutions that deter dangerous living.

“You have some out-of-towners that are slowing down, they’re paying attention to the signs we have posted,” Averett said.

“We still have a few people who still come through here (speeding). They are younger kids coming through here to get to the beach, not paying attention.”

All of the officers in the police department are certified to operate the equipment. The officers had to go through a hour and thirty minutes class. The class taught officers and city administrator how to set up the equipment, how to read the different screens and properly use the radar system.