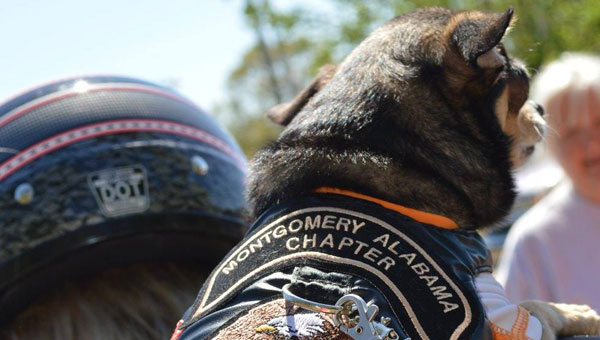 When Sharon Adkinson first got Ziggy, she would have never dreamed that he would become the medical alert dog she always needed. Ziggy and Adkinson had the opportunity to share their story at the Crenshaw County Animal Society Poker Run and Bike Blessings events held this past weekend.

Participators from Crenshaw County, Montgomery, Pike County and Florida traveled to Luverne to participate in this event, and along with motorcyclists came a special appearance by Ziggy the medical alert dog and his owners.

“My husband Randy has been riding motorcycles his whole life, and I love motorcycles,” said Beth Rogers, one of the founders of Bike Blessings.

According to Rogers, 35 bikes showed for the event and other vehicles also participated in the blessing of the vehicles and the ride itself. There were approximately 22 vehicles that took the drive.

Throughout the day, there were gift certificates from various restaurants in the area and in surrounding towns that were given out as Poker Run and Bike Blessings door prizes, and lunch was provided for all in attendance.

To her knowledge, Rogers cannot remember another Bike Blessings event ever being held in Crenshaw County; this was one of the factors that helped push the idea to the front of her mind.

“I had been wanting to do a Bike Blessing for probably two or three years. When we started this ministry, that was one of the first things I said we needed to do,” Rogers said.

Rogers and her husband felt the call to go into this type of ministry after feeling the pull of God at her church’s summer revival. The couple knew that they were being called to begin a motorcycle ministry, and with this challenge in mind, the couple began to work to put together a new and interesting type of ministry called Three in One Motorcycle Ministries.

“We had a revival at our church last summer and that just set a fire under Randy to start the motorcycle ministry,” Rogers said.

According to Rogers, the main focus of the ministry is to witness to “invisible people,” or people that might not be immediately noticed by most. It is their hope that by reaching out to this typically segregated people group they will be able to show the love of Christ to those who may be uneasy about attending regular church services.

It is the hope of Rogers and her husband that by opening up their group, as well as inviting fellow bikers to their church, that they can help break the stereotype that goes along with people who ride motorcycles.

Rogers and other Bike Blessings participants went to each vehicle before the start of the race and prayed over each one.

“We had little bottles with Olive Oil in them, and we would go to the person’s vehicle and ask if they had any prayer requests. We were praying for safety over the person and the vehicle,” said Rogers.

“Some people anointed the tires, and I would put it on the person’s hand if they didn’t mind.”

Once the bikers returned, guests were able to sit and hear the inspirational story of Ziggy the unexpected medical alert dog. Rogers explained the story behind Ziggy and how he discovered his true abilities of taking care of his owner.

“Sharon Adkinson and Ziggy the Chihuahua were the guest speakers. Well, he’s her medical alert dog, but he wasn’t trained to be. He would freak out all of a sudden and she would realize her blood sugar was out of whack. After about the third time, she made the connection,” Rogers said.

“She took him to the doctor to test it out, and he was certified to be a medical alert dog. That dog goes everywhere with her now.”

Kim Thiem, a founder of the Crenshaw County Animal Society, helped establish the group two years ago and is glad to know that so many in the community and in the surrounding communities were willing to support the causes of the two groups.

“We were thrilled with the turnout. I think for the first one that was quite good,” Thiem said. Thiem was also excited to share that during the festivities of the day, one of the pets from their shelter was adopted. It is her hope that more events like these can be held in the future, and that more pets will find their forever home.

Both groups enjoyed the day and will most definitely be planning more events such as these for the future.

“I believe God does things for a reason. We just know there’s a lot of good people, but they just don’t know who Jesus is and that He loves them. We want to show them,” Rogers said.

“These people are coming from a different place, and that’s what they need.”