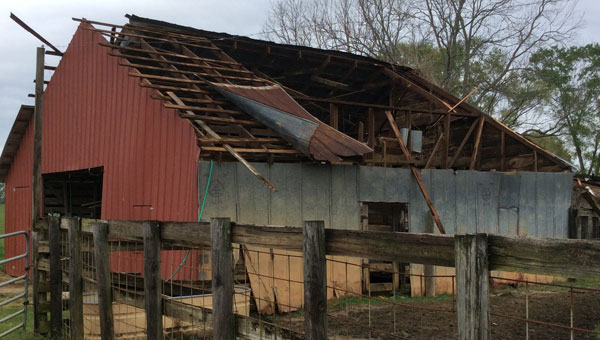 This barn, located in Brantley, was hit and badly damaged by the storms that came through last Thursday. The running total of structures damaged is four barns, three residences and three businesses.

Crenshaw County has once again faced traumatic weather damages, but thankfully no injuries have been reported at this time.

Last Thursday, the county received two and a half inches of rain after severe thunderstorms hit the area. Most of the damages that occurred were caused by straight-line winds.

“We had no injuries reported.”

Jones has verified with the National Weather Service (NWS) that the damages in the area were all caused by these straight-line winds. According to Jones, many structures were damaged during the storm, both residential and commercial. The count as of now states that four barns, three residences and three businesses received massive damages. The majority of damages were done in the areas of Dozier and Brantley.

Jones also noted that information from the NWS has shown that over the past 11 weeks, there have been 10 severe weather occurrences for the county in 2016; we are now into week 12. This coming week is estimated to bring in about three and a half inches of rain and is believed to begin today.

“They say it’s only a 15 percent chance this week, but you know how that goes,” Jones said.

“We’re going to start doing a monthly radio talk show with Luverne’s radio station, WAOQ 100.3. We’re going to try to meet once a month to let those who don’t have Facebook or Twitter know what’s going on.”

OPINION: It’s beginning to look a lot like Easter

It’s that time of year again. The time where millions of eggs are hidden in the tall grass, pounds of... read more