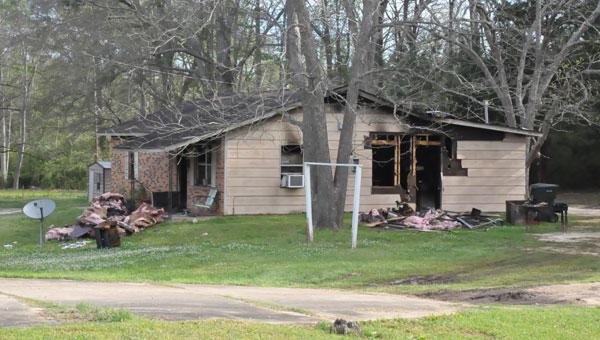 Saturday, the call went out to the Luverne Police Department and the Luverne Fire Department that a home was ablaze. The residents of the house were reported to be an elderly gentleman and his caretaker. (Photo by Beth Hyatt)

On Saturday, a call went out to Crenshaw Central at 8:39 p.m. The call was received from the 800 block of Woodford Avenue in reference to a house fire.

“The caller stated that there was an elderly male inside the residence,” said Luverne Police Department Investigator Mason Adcock.

Canine deputy Lee Simmons was in the area at the time the call went out, and reported to the scene also.

“He (Simmons) heard the call go out and responded, along with officers Josh Kidd and David Rhodes. They were the two Luverne officers on duty at the time,” Adcock said.

“They arrived and there were no fire units on the scene yet.”

“Deputy Simmons and officer Kidd were right there close to that window. They went to that window and were able to pull the elderly male and his caretaker out of the house,” Adcock said.

The fire department arrived on scene within five minutes of receiving the call and were able to contain the fire. It did not spread to neighboring structures. There was an estimated 80 percent of damage done to the structure, and was deemed unable to be rebuilt.

The point of ignition appeared to be the kitchen stove.

“Right now, there’s no reason to think there was any foul play; it was just an accident,” Adcock said.

“The officers approached the residence, fully involved, with no protective gear. The fire department made a timely arrival to the scene, but with the house as fully involved as it was, it was very possible that those two gentlemen would not have survived without the actions of the officers.”

The Crenshaw County Emergency Management Agency director, Elliott Jones, was contacted as well, and was able to offer assistance by presenting the residents with Red Cross assistance. Neither residents required hospitalization; both were treated on scene and released.

The identities of the residents have not been released.