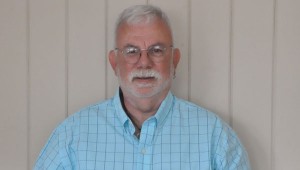 Gary Mitchell will host a book signing event at 61 on Main on April 15. (Photo by Beth Hyatt)

After focusing on his writing for the better part of 10 years, Gary Mitchell has successfully achieved publication of his book “The One That Got Away.”

This book actually marks Mitchell’s third book to be written but is the first to be published. He currently has written one book of poetry and one telling his family history. He has successfully attained the copyright on the family history novel, but has not begun the publishing process for it yet.

Mitchell says that the writing process for the book took anywhere from eight to 10 years; the book is self-published. Mitchell had the book copyrighted through the Library of Congress, and then began the process of selling paintings in his local art gallery to save up the funds to have it published. The self-publishing process also required Mitchell to buy the books after self-publishing. He has donated one copy to the Luverne Public Library, and copies can be found online at Amazon and other bookstores.

Mitchell says that the book’s genre would fall into the category of contemporary horror and fantasy, and credits Stephen King as one of the main sources of inspiration for his novel.

“It does have some adult situations and a little bit of bad language in it sometimes, but I tried to make it relevant to our society. It’s not something I really ascribe to, but it just makes the book real.”

The book follows a retired social worker living in a small south Alabama town who does not always make the best choices. Mitchell said that situations in the book happen as a result of an on-going battle between the main character and a fish, and could be considered a modern “who done it.”

Mitchell says the book is dedicated to Department of Human Resources (DHR) social workers. While the main character’s behavior may seem questionable at some times, Mitchell assures readers that such behavior is not representative of the DHR workers he knows.

“They are a hardworking group of people. I just wanted to give them the recognition they deserve as being caretakers for children, because they do a great job,” Mitchell said.

Mitchell spends his free time working at his art gallery, G. Mitchell Gallery, and devotes much of his time to working with the Luverne Downtown Merchants Association (DMA).

While there may be a few references to his family members in the book, Mitchell says that characters and occurrences won’t really cross over into the real world town of Luverne.

Along with his work in the art gallery, Mitchell hopes the publishing of his novel will inspire other writers and artists in the area to pursue their talents and dreams.

“I don’t want to lead people to think they can make a living with this; it’s more of an avocation than a vocation. But I would like to inspire people to step out and do what you want to do,” Mitchell said. “This is something I really wanted to do, if I break even I’ll be doing all right, but I just wanted to do this. If people want to do something, I want them to be able to do it. I hope it inspires them to take that leap of faith, so to speak.”