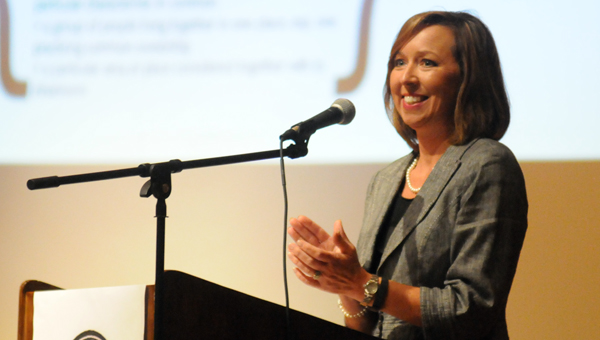 Butler County Schools Superintendent Amy Bryan is one to watch.

At least according to the National School Public Relations Association, which recently named the Butler County Schools chief to its 2015-2016 Superintendents to Watch list.

The list, which features 25 superintendents nationwide, recognizes superintendents, with fewer than five years of experience in the role, using communication technology in innovative and effective ways.

Bryan was named the Butler County Schools’ top post in March of 2014 following the resignation of Darren Douthitt. Since taking over as superintendent, she has been named Superintendent of the Year by the Alabama Community Education Association and was the recipient of the Alabama School Public Relations Association’s 2015 Outstanding Leadership in School/Community Relations Award.

Bryan also started an annual report for the school system, which is distributed to stakeholders in the community, and has been recognized with a Gold Award for Excellence by the Alabama School Public Relations Association.

While Bryan said she is “thrilled” be named to the list, along with Dr. Sheila Phillips, superintendent of Vestavia Hills City Schools, she said the recognition is not hers alone.

“This doesn’t feel personal to me,” she said. “Though I am receiving the credit, communication awards are the result of everyone pitching in and sharing the great things going on in each school. I may have the conviction of communications being necessary, and the vision to motivate others to that end, but our teams of educators in each school, the Central Office, and even other superintendents challenge and motivate me as I see them sharing, posting, and tweeting.”

Bryan said when she took over at the helm of the school system, one of the first things she did was to create a public relations plan that focused on sharing the positive things happening within the district. She said receiving recognition, such as being named to the Superintendents to Watch list, is evidence that the plan is helping school officials get the word out about the positive things happening in the district.

“We have a communications plan to push out information on the positive things going on in all of our schools and this award and others just affirm that, at least to a certain extent, our plan is working and is even capturing the attention of those outside of Butler County, and even outside of Alabama,” Bryan said. “We have great schools in Butler County. One of our jobs is to communicate that.”