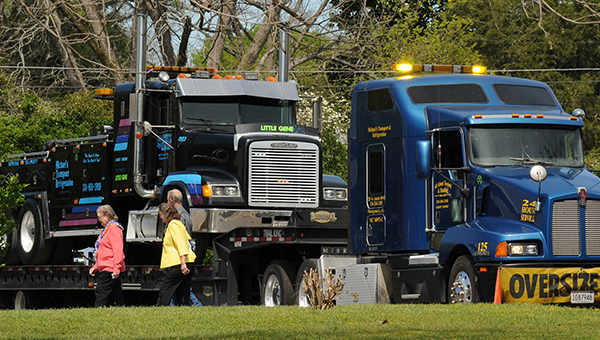 Family members and friends gathered Tuesday to remember Gene Lee Schofield, Jr., who was killed March 23 when he was struck by an SUV while on a service call for All About Towing & Hauling. A procession of tow trucks that included vehicles from as far away as Mobile and Birmingham escorted Schofield’s hearse from Dunklin and Daniels Funeral Home to the cemetery. The procession included Schofield’s truck (pictured).

Gene Lee Schofield, Jr., was a father, a brother and a son. He was a friend to many. He was also a victim.

Schofield was a tow truck operator for All About Towing & Hauling in Montgomery. On March 23, he was responding to a call on Interstate 65, just south of Greenville, when a 2000 Chevrolet Tahoe driven by 36-year-old Shawn Antonio Davis of Selma struck him. According to the Alabama Law Enforcement Agency, Davis was under the influence of alcohol and ignored the state’s Move Over Law. Authorities say that Schofield had the amber lights on his tow truck flashing. Davis has been charged with reckless murder.

In 2009, the legislature passed a state law that requires drivers approaching stationary emergency vehicles that are displaying flashing lights, including wreckers, traveling in the same direction, to vacate the lane closest if safe and possible to do so, or to slow to at least 15 mph less than the posted speed limit.

Anna Findley, Schofield’s sister, said her father, Gene Schofield, Sr., who owns and operates Gene’s 24 Hour Road Service, had a close call with a motorist years earlier just three miles from where her brother was killed.

“Dad was working on a really large truck just below where Gene was killed when the truck he was working on was hit by another car that didn’t move over,” she said. “Over the years they have had a number of close calls.”

Findley said she doesn’t believe motorists pay enough attention to tow trucks when they are stopped to assist drivers in distress.

“I’m not sure if people just aren’t aware of the law or if they just don’t pay attention to it, but I definitely don’t think that people show tow truck drivers the respect they deserve,” said Findley. “Tow truck drivers are emergency responders, too.”

The Emergency Responder Safety Institute, a national advisory group of public safety and transportation experts, estimates that on average, six to eight fire rescue and EMS workers are killed working in or near moving traffic each year, as are 10 to 12 police officers. The institute says that about 50 tow truck operators are killed. It doesn’t break out how many of those cases involve victims who were struck because of move over violations.

There are no comprehensive statistics on emergency and roadside workers who die or are seriously injured on highways because motorists fail to move over. No single government body is responsible for collecting and maintaining that information.

“It’s a nationwide problem. It’s been ongoing for several years and it’s scary for our drivers,” said Jeff Roskopf, president of the Towing and Recovery Association of America, an industry trade group. “You never know when something’s going to happen, even if you’re just changing a flat tire.”

On Tuesday, Schofield was laid to rest. His hearse was led to the cemetery by a procession of tow trucks that included vehicles from as far away as Mobile and Birmingham. Findley and the rest of her family are hoping the tragic death of her brother will help increase awareness about the law and hopefully keep another family from suffering a similar loss.

“Gene was so soft-hearted,” she said. “He really loved people, and he’d do anything for anyone. If you needed it, he’d give you the last $10 he had, even if he needed it. He always tried to help people. He was so much fun. He did some crazy things in his life, some he got caught for and others he didn’t. It’s just unbelievable that the one time he wasn’t doing something crazy is the one moment that took his life.”