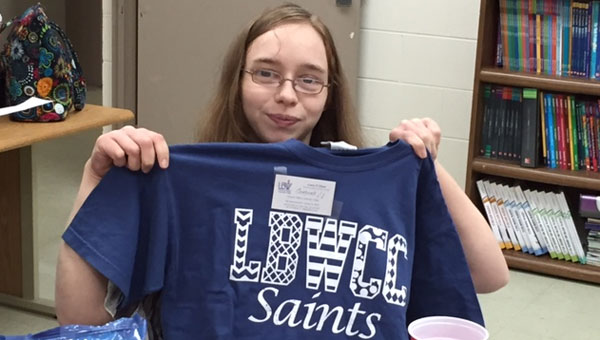 After two years of rigorously studying and preparing, Jaimi Royal is now the proud recipient of her General Education Degree (GED).

After many years of struggling and persevering, Crenshaw County native Jaimi Royal can now say that she is the proud recipient of her General Education Degree (GED), thanks to the help and support of not only her actual family but also her LBW family.

“I love the staff, I love the faculty and I know a good bit of them. I consider a few of them to be friends,” she said.

“I definitely consider them part of my support system, too.”

Royal was born with cerebral palsy, which made the everyday task of living more strenuous. In 2002, she dropped out of high school in the eleventh grade. Years later, the death of her husband in April of 2013 left her with two young children to rear.

Although Royal’s disability caused daily struggles for her, she realized much could still be accomplished in not only her life, but also in the lives of her children. It was then that she decided to attend LBWCC in Luverne to get her GED.

“The class I took was to get my GED, and I just had to pursue it after my husband passed,” Royal said.

“I had started and stopped, but after Billy passed it kind of gave me the kick I needed. It took me a while, but I stuck with it and got it done.” Royal says the degree in its entirety only took her two years to attain.

Royal appreciated the ease of working with the staff at LBW Luverne Center, and knows that their help and support pushed her to continue. She complimented the accessibility of the classes and noted that it was very easy for her to schedule her classes around her personal life.

In June of 2015, Royal succeeded in passing her reasoning through language arts test, which gave her the confidence boost she needed to continue on to her other tests.

In July 2015, she passed the social studies test, followed by the science test in November 2015 and finally the mathematical reasoning test in February.

Mary Mitchell, adult education teacher at LBW Luverne Center, is proud to see the accomplishments of Royal, and was thankful to be able to share in the joy of her success.

“Jaimi is a devout Christian. She believes in praying about things, and she did that so often,” Mitchell said.

“With her mother’s support, our support and her strong belief that she has in God, she managed to make it. It’s unbelievable.”

Royal is not only thankful to her LBW family for their help and support, but she also credits much of her success to her mother and to her religious background. Royal is a member of FaithWalk Ministries in Luverne.

“My mother is definitely a strong part of my support system as well as my faith,” she said.

“That’s my source of strength, my source of hope. It helps me not to give up even when I want to or not to stay stuck when I feel stuck.”

Royal now plans to take on the future by searching for a job. She has also expressed interest in beginning her college degree after her youngest child later enrolls in school.

“One hundred percent, I would come back to LBW,” she said. Her interests lie in the fields of business and counseling.

“Jaimi can do a lot of things, and I think that she will find her niche and she will get with it. I most definitely think she will do well in whatever field she pursues,” said Mitchell.

Kelly Minter served as not only the speaker, but also as a musical guest for the recent “Clothe Yourself” women’s... read more