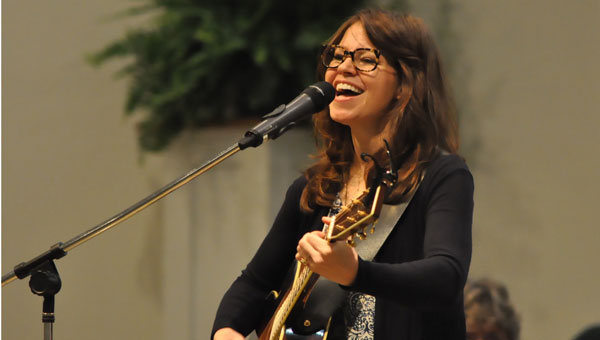 Kelly Minter served as not only the speaker, but also as a musical guest for the recent “Clothe Yourself” women’s conference hosted by the Crenshaw County Women for Christ organization. (Photo by Beth Hyatt)

With the first day of spring rolling around, it’s time to put away winter clothes and begin searching for new apparel. With this wardrobe change in mind, the Crenshaw County Women for Christ decided not to take this clothing change literally, but instead spiritually.

This past weekend, the Crenshaw County Women for Christ hosted their 10th annual conference, entitled “Clothe Yourself.” The focal verses for this conference can be found in Colossians 3:12, “…put on tender mercies, kindness, humility, meekness, longsuffering.”

A grand total of 320 women from over 80 churches turned up to hear the inspirational words brought by the speakers and performers, as well as the impromptu choir. 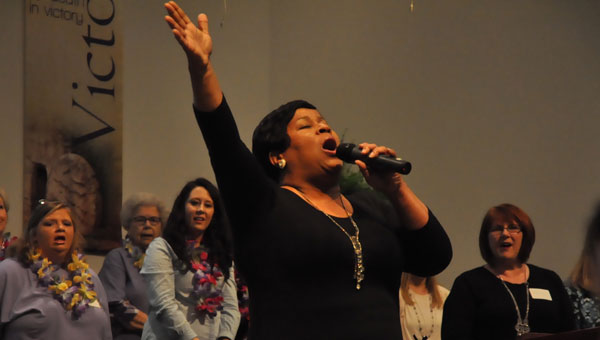 Shelia Jackson and Company served as the guest musician at the conference this weekend. (Photo by Beth Hyatt)

“We are an interdenominational fellowship, and we are encouraged when we see women from all walks of life coming together as one body,” said Ann Tate, member of the steering committee for the group.

“We ask the participants each year to evaluate all aspects of the conference, and they are given an evaluation card to do so.  The comments were what we prayed would be the outcome—that they were blessed by the fellowship, the music and the messages.”

Well-known names such as Shelia Jackson and Kelly Minter made appearances on Saturday, and local music enthusiast and author Nancy Petrey tickled the ivories as well as performed an original monologue.

Minter served as the guest speaker and spoke on the importance of clothing yourself in the virtues found in Colossians 3:12.

As a pastor’s daughter, Minter began her adventure into the world of ministry at a young age. After moving to Nashville to pursue a career in music, Minter faced times of success as well as difficulty. When the opportunity came to dive into a new avenue of ministry, she felt the call to follow this path.

“I grew up in a pastor’s home, so it was kind of in me from the beginning in a lot of ways,” she said.

“I ended up getting an offer to write a book, then a Bible study. One thing kind of led to the next and then I got moved into the ministry.”

Minter focused on the five virtues listed in the verse and challenged the audience to examine their own lives and hearts to see which of these virtues were in need of some fine tuning.

“I think all of us know what it’s like to not feel chosen, and if we have not truly received that incredible gift of what it means to be chosen by Jesus Christ, then I think it’s going to be really hard for us to wear those virtues,” Minter said.

According to Tate and the steering committee, the day went off without a hitch, and the plans for next year’s conference will begin in the coming weeks.

“It was a glorious day.  There was a high percentage for rain and scattered thunderstorms. We had no rain, and the sun was shining by lunch time. We are thankful for God’s grace over the weather,” Tate said.

“It takes a community of volunteers to prepare for the conference and to help on the day of the conference. We had dozens of men and women who prayed and donated their time and resources. We are grateful beyond words to everyone who played a part.” 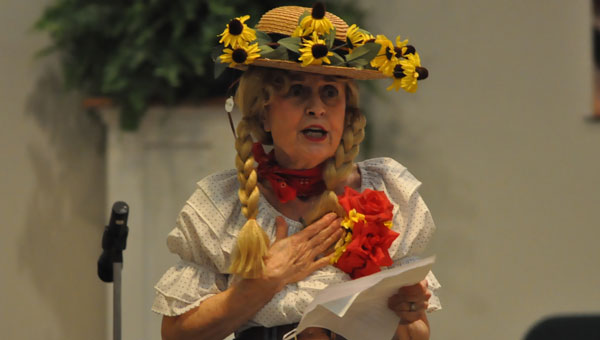 Nancy Petrey tickled the ivories as well as performed an original monologue.
(Photo by Beth Hyatt)