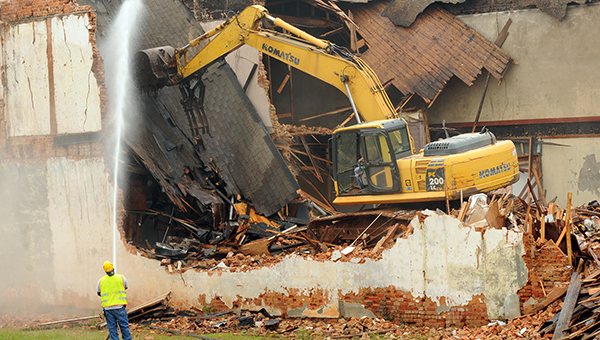 Workers demolished several crumbling structures along Commerce Street near the Greenville Area Chamber of Commerce on Wednesday to help clear the way for the creation of a veterans park. (Advocate Staff/Andy Brown)

Greenville’s city leaders’ dream of a park to honor the area veterans moved one step closer to reality on Wednesday.

Workers demolished several crumbling structures along Commerce Street near the Greenville Area Chamber of Commerce, which according to Mayor Dexter McLendon, will one day serve as the site for the park.

“When people come under the underpass, we want them to say, ‘Wow, that’s beautiful,’” McLendon said.

The mayor said city horticulturist Jennifer Stringer and members of a local garden club will help beautify the area.

“All we’re really going to have to do is turn Jennifer loose,” he said.

McLendon said he’s already had preliminary talks with several architects about the project, which he hopes will help draw even more visitors to downtown Greenville.

“This will be something that honors our veterans, but it will also be somewhere that we can have events downtown,” he said. “It’ll be another draw for downtown, like the Ritz Theatre. It’s something that can help bring people downtown and hopefully they’ll shop at the businesses down here.”

McLendon first announced the plans to build the park in February, but has been working on the project for more than a year. He said that while progress is being made, the project won’t be completed overnight.

“This is something that’s going to take time,” he said. “We have to budget for it, but we’ll get it done, and it will be something nice that we can be proud of.”

Jobless rate on the rise