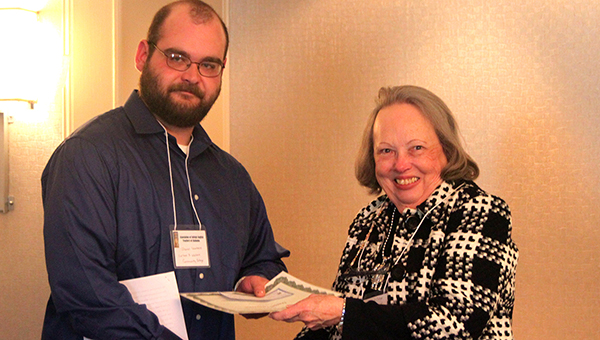 The Greenville native received the award for his essay titled “The Weight of a Lesson.”

“I’m very proud to have received this award,” said Lawrence, who plans to pursue a nursing career. “I always strive to do well at any task, and to have a group of established English educators vote my paper as the best is quite the honor.”

The essay was based on an old photo from childhood featuring his 12-year-old-self holding up a trophy catch from a fishing trip. The photo brought memories of life-long lessons learned from his father, and the particular heroic role his father played in helping him land the fish.

Christy Hutcheson, a member of LBWCC’s English faculty, entered Lawrence’s essay in competition, which included writing submissions from students across the state in both community colleges and universities.

“Christy Hutcheson is a fantastic teacher and deserves equal credit,” said Lawrence. “I’ve had a great group of teachers who consistently go above and beyond to ensure that their students receive a quality education and help them understand what they need to do to achieve their goals. LBWCC has taken the fear out of continuing my education and made it seem possible.”

Lawrence is currently completing general studies courses at LBWCC in Greenville before transferring to Troy University to pursue a bachelor’s degree in nursing. His long-term goals include achieving an Advanced Practice Registered Nurse (APRN) degree and pursue a career as a nurse practitioner.

“We are very proud of this award-winning student. He is certainly an inspiration to other students and faculty,” he said.

“I also commend Christy Hutcheson for her outstanding work with our students and for recognizing the potential of this essay and submitting it in the competition.”