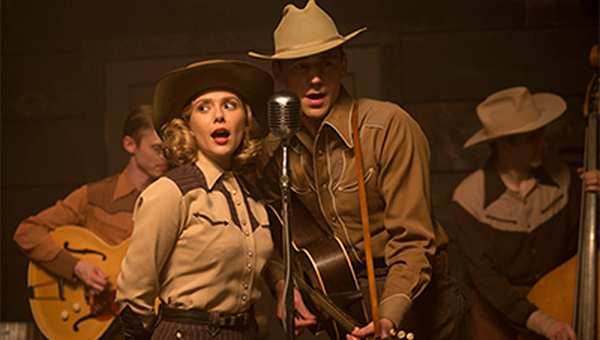 Editor’s Note: A private showing of “I Saw the Light” was held Monday night in Montgomery City Hall, the old Montgomery City Auditorium where Hank Williams’ funeral was held Jan 4, 1953. The film will be released on a limited basis Friday and will debut in theaters nationwide April 1.

For roughly two hours, Tom Hiddleston, star of the new biopic “I Saw the Light,” becomes Hank Williams, for all intents and purposes.

The English actor (known primarily for his role as Loki in Marvel’s “Thor” and “Avengers” series) transformed into the silhouette of the legendary artist’s wiry frame in the course of a year, taking lessons from country music coach Rodney Crowell and even joining him onstage at Michigan’s Wheatland Music Festival to perform a set of Williams’ songs in front of a live audience.

While Hiddleston’s pitch doesn’t quite match that of his inspiration, it hard not to be captivated by his performance and uncanny resemblance.

While Hiddleston and co-star Elizabeth Olsen, who stars as his first wife, Audrey, carry the film with stellar performances, director Marc Abraham fails his lead cast with an uneven film that lacks more soul than a biopic starring Hank Williams should.

The film charts the country singer’s sudden rise to fame, decline and early death at the age of 29, and it doesn’t once shy away from the various demons that plagued Williams.

Infidelity and alcoholism are constant obstacles on Williams’ path to the Grand Ole Opry and beyond, and Hiddleston does an admirable job of portraying the inevitable downward spiral that casts a shadow over the entire film.

What’s less impressive is how rote and by-the-numbers the approach has become in the wake of films like “Walk the Line” and “Ray.”

Though strong cinematography often make the film a beautiful sight to behold, its actual structure suffers from a tedious, extremely linear progression.

The snapshots of Williams’ life that Abraham chooses to reveal either highlight his struggle with relationships or the ease with which he captivates audiences onstage with his soulful crooning, but he does little to reconcile the two sides.

The film comes very close to achieving this during a memorable scene between Williams and a reporter who asks one-too-many sensitive questions.  The reporter asks what he hopes people take away from his music, and it’s clear in Hiddleston’s drunken, contemplative face that music has become a way to turn his own broken life into a means of helping others.

But the moment is as fleeting as those moments of clarity in Williams’ final days.

Overall, “I Saw the Light” is an impressive display of its lead stars’ talents, as well as Hiddleston’s dedication to his craft.  It’s unfortunate, then, that such a nice gift is wrapped in an uninteresting package.