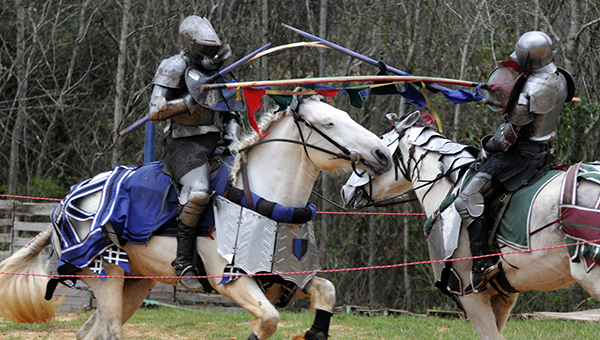 Visitors from the Camellia City and beyond were transported to a simpler time Saturday and Sunday during the Alabama Medieval Fantasy Festival.

The renaissance fair, located at 4776 Fort Dale Road, offered a faithful recreation of life at a slower pace, during a time when people still believed in fairies, dragons and the merits of cold-hard steel worn at one’s side.

And though adventurers had to brave a muddy marsh—and extra attraction courtesy of Mother Nature—before making it to the fairgrounds proper, but the slosh did little to dissuade visitors from eating, drinking and being merry.

Event coordinator Nancy Ardoin expressed her appreciation of those that came out last weekend, as well as those that helped make the event a success.

She added that despite the minor hiccups caused by the weather and other outside factors, she was pleased with the first-year effort.

“I just think that, for a first-year fair, you want to see where everything is loose and what works and what doesn’t,” Ardoin said. “I think it did exactly what it was supposed to do.  And considering the weather, I think it went well.

The cold temperatures and high winds on Sunday did raise cause for concern during the raptor show, but the shortcoming was soon forgotten thanks to the weekend’s biggest draw—the periodical jousting competitions.

“The joust was the most popular attraction, beyond the shadow of a doubt,” Ardoin said. “It’s the attraction at every fair.”

In addition to the joust, visitors flocked to dozens of vendors that sold various wares, including blades, shields, bear oil, turkey legs, fine leather goods and everything in between.

“ We had a couple of vendors that I will not have back next year for one reason or another, but the majority of my vendors had a wonderful time,” Ardoin said.

“We’ll have more permanent buildings on site next year.  And we’ll have better roadways.  It’s just an ongoing build, and we knew when we got here that it was going to be a minimum five or six-year build.”

Despite the sizeable crowds and press coverage, including a top story on Channel 8 News the Saturday evening, Ardoin said that the festival was always going to struggle to make a profit in its opening years.

“We got a warm reception from the people of Greenville, and my vendors loved the town,” Ardoin said.

“We had 30 or 40 people going out for dinner every night, so the economic impact shows.  So I’m hoping that between the good response we had the first year, our economic impact on the city and the wonderful press we’ve received that we’ll be at a five or six-week festival every spring, and during the summer we’ll be doing another event.”

The Alabama Medieval Fantasy Festival will return in 2017 for three weekends and a student day.