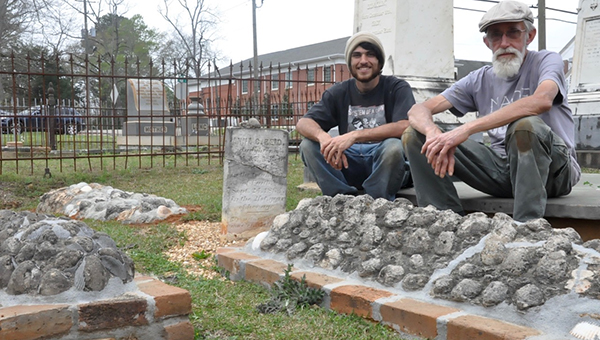 Matthew Iovino (left) and Ray Hall (right) in front of three of the graves they restored in Greenville’s Pioneer Cemetery. (Advocate Staff/Beth Hyatt)

With much of the restoration project behind them, Ray Hall and Matthew Iovino with Eclectic Stoneworks have completed repairs on 18 monuments in the historic Pioneer Cemetery.

Hall has served as a stonemason for the past 50 years. After hearing about his expertise, the Pioneer Cemetery Preservation Association (PCPA) contacted Hall and requested his aid in restoring some of the gravesites that had fallen into disrepair over the years.

“Some of these were in pieces, and some of them were totally gone except for a foundation,” said Hall.

“I started doing cemetery restoration about three or four years ago.”

With the variety of grave markers and grave coverings present in the cemetery, it was important for the group to find a professional with experience in many different types of stone.

Anne Feathers, president of the PCPA, said the group heard of Hall’s talents through a recommendation from the Alabama Historical Commission (AHC). After hearing such high praise on Hall’s work, it was decided that he would be the perfect choice.

“He was the only one they (AHC) recommended,” said Feathers.

The duo has worked in Pioneer Cemetery off and on since August, and has finally completed a majority of the repairs. While there are still more projects that lie ahead for the cemetery, Hall and Iovino are glad to see the fruits of their labor.

Hall was also impressed with the amount of dedication the Camellia City gives to restoring its historical landmarks.

“It’s amazing that a city would do that. They wouldn’t do that in bigger cities,” he said.