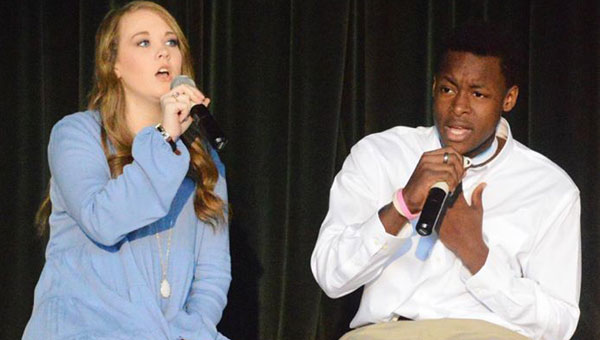 Recently, students and facutly of Brantley High School came together to construct a Black History Month program to honor those who had a hand in the history of African Americans. Pictured are, from left to right, Gracie Roberts and Jermany Salter performing “Amazing Grace.”

To mark this event, the students of Brantley High School came together to celebrate the accomplishments of those who truly made a difference in not only African American history, but history as a whole.

Crystal Freeman, second grade teacher at Brantley High School, along with other BHS faculty members came together to organize this year’s Black History Month program with a specific theme in mind.

The title of this year’s program was “Who Am I?” and incorporated a live wax museum into the program.

“It was an amazing program and the kids loved it. I was very proud of everyone,” said Freeman.

Students decided on person from the past or present to study who they believed made a significant contribution to African American history. There were 11 students who performed in the wax museum, and many of these same students also entertained the audience with musical and theatrical performances. 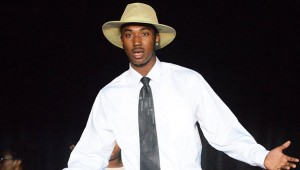 “They stood on stage, like they were in a museum, and when the spotlight hit them, they became that person,” said Freeman.

“They demonstrated or gave facts about that person and told the audience five or six facts about what that person did to contribute to the history of black people and history overall. At the end of it, they said ‘Who am I?’”

The students took time to study up on their characters, gather costumes and prepare a speech that was then performed in the wax museum. Influential historical figures such as Martin Luther King, Jr. made appearances, as well as present day African American performers and leaders.

Reginald Green, native of Luverne and chairman of the Crenshaw County Personnel Board, served as the guest speaker for the event. He spoke to the students about the importance of equality, regardless of race or gender and reminded the students how blessed they are to be in an integrated school system. Green recalled stories from his own childhood regarding the segregation of the schools, and he is encouraged now to see that barriers such as that have been taken away from present day educational facilities.

The program also gave the student body the chance to honor the oldest living serviceman in the Town of Brantley, J.B. Cox, who is 91 years old. Cox was presented the award by his two great-granddaughters, who both attend BHS.

According to Freeman, the presentation was an overall hit with the student body, and she believes that the topic of the speech greatly impacted those in attendance.

“It’s important for the children to know who they are and to remember who they are. It relates back to the theme,” said Freeman.