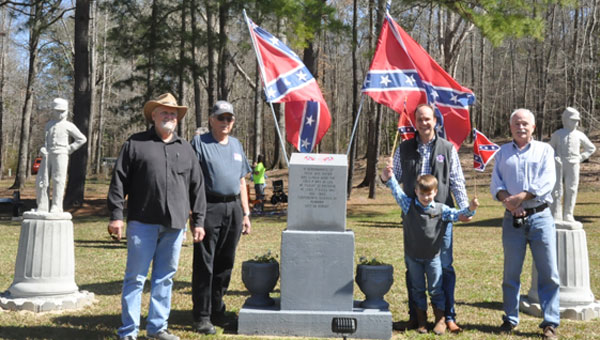 With the occurrence of National Confederate Flag Day came the chance for the Sons of Confederate Veterans heritage group to fellowship and celebrate.

Commander of the Ben Bricken Camp 396, David Coggins, has been part of the group for the past two years and was ecstatic to see the crowd that gathered.

“We had probably about 160 people there. It was a family thing, and that’s what Sons of Confederate Veterans is,” said Coggins.

According to Coggins, the Sons of Confederate Veterans group is an organization dedicated to preserving the history and legacy of confederate heroes, so future generations may understand the motives that galvanized the Southern Cause.

The group is also a direct successor of the United Confederate Veterans and is the oldest hereditary organization for male descendants of confederate soldiers. The group’s counterpart is the United Daughter of the Confederation (UDC).

Along with authentic historical presentations and the hoisting of the colors, the group participated in cannon fire and Confederate soldier impersonations. The group also proudly flew 101 various flags throughout the day.

“We support our heritage and our ancestors. We do educational stuff, and that’s why I built that park down there,” said Coggins.

“They learn about the Confederate flags, about our history and our ancestors and about our government and what took place, the real history that’s not taught in the school books.”

The Ben Bricken Camp 396 currently has about 36 members, and also gained a few more members at the flag day event. The event was open to the public and welcomed anyone interested in learning more about the group.

The only qualifications for membership are to be a male at least 12 years of age and have an ancestor who fought for the Confederate states of America or helped in some way, such a civil service.

The group believes that giving back to the community is one of the most important things they can do. Because of this, they perform community and county service projects. Their most recent was a trip to the Luverne cemetery to clean up gravesites and to restore a damaged marker. They also raise funds to repair damaged flags in cemeteries and around the area.

“Our heritage is important. People who don’t have a heritage and a past, don’t have much of a future,” said Coggins.

“We honor our heritage and our ancestors because a lot of them fought and died for our liberties. We’re not a hate group. We have African Americans, Hispanics, Native Americans, all races in the group. If they have an ancestor, they are eligible to be in the Sons of Confederate Veterans.”