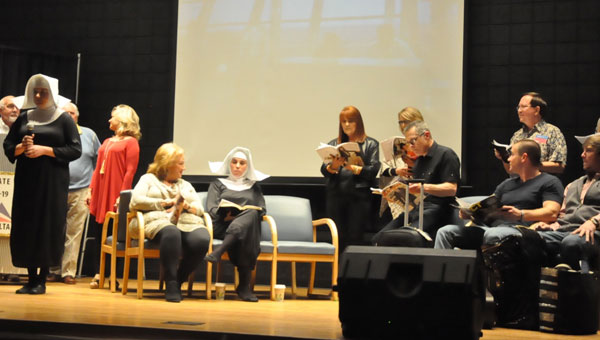 The Luverne Public Library hosted its seventh annual dinner theater production last week, and invited the audience to sit back and enjoy an evening of airport-related humor. (Photo by Beth Hyatt)

Last week, the Luverne Public Library once again dazzled audiences with a performance like no other.

This year marked the seventh annual dinner theater production for the library, and just as it has been in the past, this year proved to be entertaining and memorable.

“It began as a part of a state-wide reading initiative called ‘The Big Read’.  The book that was selected as the basis of that event was ‘The Adventures of Tom Sawyer,’” said library director Kathryn Tomlin.

“Rene Lester, the previous library director, had scheduled Mr. Will Stutts to perform his one-man show as Mark Twain.  The event was such a success that it was decided that we would continue having them once a year.  Since then, we have had story tellers, a Teddy Roosevelt reprisor and the LBW theater group.”

The show for this year was called “Gateway Passages, glimpses of life at Gate A-19” written by Anne Head and directed by her late husband Jim. Unlike past performances, this year’s entertainment brought in singing and dancing to really wow the audience.

Students and community members alike showed not only their acting abilities, but also their singing, dancing and instrumental ones. Along with showcasing the talents of many locals of Crenshaw County, the performance also gave the audience the chance to participate in the singing of many classic and well-know songs.

“The last two years, we have been fortunate to have plays directed by Mr. Jim Head. Last year, Jim called on performers who had been a part of the Crenshaw Players as cast members. All Jim had to do was ask, and they were willing to participate,” said Tomlin.

While things seemed to flow seamlessly to those in the crowd, Tomlin knows that the success of an event is based completely on the dedication of those behind the scenes.

“Sandy is another person who has no trouble getting a team of workers together. She had several people who helped with the preparation and serving that night.” 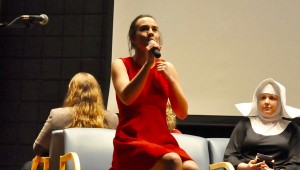 Brantley High School sophomore Emily Sims entertains the crowd with her song and dance to the classic tune, “I Wanna Be a Rockette.” (Photo by Beth Hyatt)

According to Tomlin, once the play is decided on, Walker then takes the theme of the performance and plans the menu, costumes for servers and other aspects to match the evening’s theme.

“Sandy’s generosity is what makes the dinner theater a fundraiser for the library, and we are so grateful for all she does,” said Tomlin.

“Without the dinner theater ticket sales, we could not provide e-books for our library patrons. It also allows us to have more children’s programs during the year.”

The evening progressed smoothly as Chamber of Commerce Belles and Beaus attended to the guests, dressed in flight attendant costumes. A silent auction was also held, and funds from this portion of the evening have continued to aid the library each year in purchasing more materials. The silent auction is sponsored by the Friends of the Library group.

“The auction is always successful because there are so many wonderful items to bid on. This event has paid for numerous items the library would otherwise never have been able to afford, such as computers, a patron counter, barcode scanner, flat screen TV and extra cabinets in the kitchen,” said Tomlin.

“They also provide funds for our monthly craft days and snacks for our summer reading program.”

The success of the evening was obvious as the performers received a standing ovation from the audience as the musical came to an end.

“The library is blessed with so many individuals who support us with their time, talent and money. Without community support, we would not be able to provide as many services and programs as we do,” said Tomlin.

“Behind every great library is a great community that supports its library.  We are blessed with individuals and organizations that support our efforts at the library, and we are grateful to all of them.”

Lilly Harold has successfully finished her first autobiography, “Memories to Cling.” With the road behind her filled with obstacles and... read more