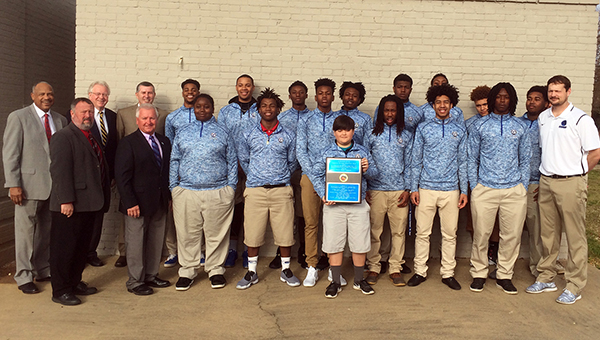 The Georgiana School basketball team racked up one more accolade on Monday.

The Butler County Commission recognized the Panthers’ record-setting season during its regular meeting and presented head coach Kirk Norris and his team with a plaque honoring the team’s accomplishments.

The Panthers posted a school-record 30-2 mark en route to a runner-up finish in the state tournament.

The trip to the Finals was the first in school history for Georgiana. The Panthers advanced to the Final Four in 2012.

“This team made Georgiana proud this year,” said Commissioner Darrell Sanders. “… We just wanted to thank the team for going all out and doing what they did, and representing us well.”

Commissioner Frank Hickman said that while the Panthers fell just short of their ultimate goal of a state title, they have much to be proud of.

“Not many teams can say they won 30 ballgames in one year,” he said. “That’s something they should be justly proud of and remember for the rest of their lives.”

Commissioner Joey Peavy, a 1984 graduate of Georgiana School, said that while the Panthers deserve praise for what they accomplished on the court, the coaches and players also deserve to be recognized for how they handled themselves off the court.

“The team was well behaved and well dressed and carried themselves well,” he said. “They don’t realize it now, but that’s important. When they are out like that, they are representing Butler County. When a team acts like they did, it makes us all proud.”

Norris, who was at the helm of the program for both Final Four appearances, said this group of student-athletes has helped create something special at the school.

“When you think about Georgiana, you think of basketball,” Norris said. “These guys have got it that way the last four or five years.”

Is Zaxby’s still coming to Greenville?

In November, the City of Greenville announced it would sell a portion of property in the Interstate Plaza shopping center... read more