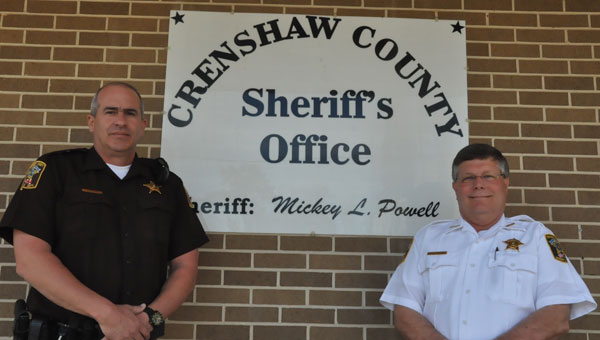 With the new year comes a new face in the role of chief deputy for the Crenshaw County Sheriff’s Office.

Last week, the Crenshaw County Commission officially approved Mike Johnson for the position of chief deputy, and he is ready and willing to take up the call.

“I’m excited, proud and honored. Sheriff Powell is doing some things that have needed doing for a while. The old administration did a great job, but we’re going into the future and taking it where it needs to be. I’m going to assist him in whatever he needs done and we’re going to go far. We’re going to start ‘nippin it in the bud’ the best we can,” said Johnson.

The Sheriff’s Office is continually growing and looking for opportunities to help the community, and Crenshaw County Sheriff Mickey Powell is confident that with Johnson on the team, the office will go far.

“Mike’s been the chief investigator since before I took office. He knows the way the office runs and he’s done an excellent job,” said Powell.

“Mike’s a go-getter, and I’m looking forward to working with him. He’s been a tremendous help. I feel good about him; he’s going to make an excellent chief deputy.”

In his new position, Johnson will be responsible for maintaining the Sheriff’s Office paperwork, overseeing investigators in the office and will also step up and take on the roles of the Sheriff whenever he is called to.

Johnson will also aid Powell with the everyday tasks of managing the Sheriff’s Office, as well as the county jail. With this position comes a great deal of responsibility, and Johnson is honored that he was chosen.

“Mike’s a veteran, he’s smart and he uses a lot of common sense, and that’s what it takes in law enforcement. He’s going to do a good job for this office and for the county,” said Powell.