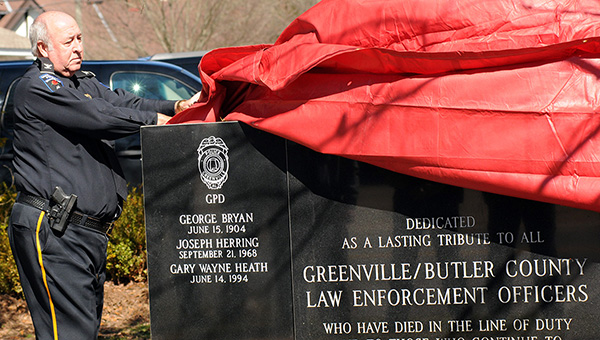 Greenville Police Chief Lonzo Ingram unveils the law enforcement memorial bearing the names of officers who have been killed in the line of duty. (Advocate Staff/April Gregory)

Six Butler County law enforcement officers have made the ultimate sacrifice while protecting their friends and neighbors.

The names of those six officers are now etched in stone — a permanent reminder of the selflessness.

“Adding these names to the monument will make sure they don’t get forgotten,” said Greenville Police Chief Lonzo Ingram said. “That’s important. That’s why we call their names every year at our memorial service. We want to keep their memory alive.”

On Wednesday, Ingram, along with Butler County Sheriff Kenny Harden, unveiled the monument that stands in front of Greenville’s City Hall.

Each year the fallen officers are honored at the Greenville Police Department’s memorial service.

Decision 2016 Butler County’s turnout for Tuesday’s primary elections was close to 43 percent. There were 13,198 registered voters in... read more