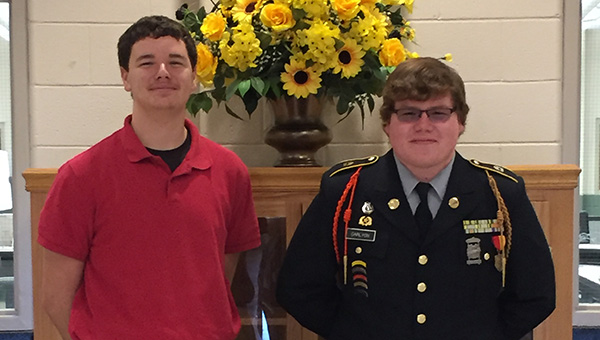 A pair of high school classmates and friends are sharing an experience this week for which many across Alabama applied, but few were chosen to participate.

Greenville High School’s Banes Carlyon and Laun Pryor are among the hundred-plus sophomores from high schools across the state attending this week’s Capstone Leadership Academy at the University of Alabama.

Pryor and Carlyon, nominated by GHS counselor Todd Henderson, had to submit their academic records, school and community activities and an essay to the Capstone Council for consideration as candidates to the Academy.

Pryor, a member of the GHS band, plays the French horn and piano.

He has made several All-State Band appearances. A member of the GHS Scholar’s Bowl team and a regular on the “A” Honor Roll, Pryor was also a Poetry Out Loud state finalist and served his school as representative for the HOBY Leadership Conference.

Involved in Scouting since the first grade, Pryor became an Eagle Scout in November 2015.  At the high school, he is also a member of Tri-M, Beta Club and the SGA, where he has held position as treasurer for two years. He serves the community as one of the Greenville Area Chamber of Commerce’s Chamber Pages. He is also a CERT (Community Emergency Response Team) member.

“I have to say I was surprised at being chosen because of the vast amount of people who did send in applications,” said Pryor. “I am most anticipating meeting people, and learning how to advance myself as a leader.”

Carlyon s is a fellow member of the Scholar’s Bowl team and the GHS Band, where he is involved with both the symphonic and jazz bands as well as the marching band. A member of the Beta Club and Tri-M, he has also served in the SGA as vice-president for the past two years.

Carlyon holds the rank of Sgt. First Class in the GHS JROTC, where he holds the position of Acting Platoon Leader. He is Drill Master for the JROTC Drill Team and is part of their Rifle and Academic Teams. Carlyon received an “expert” award for his shooting as well as an award for highest score on the B-Team.  He has maintained a 4.0 GPA since ninth grade. He is also active at his church, where he works with SALT and is part of the VBS crew.

“When I was chosen I thought it was absolutely awesome that out of so many other sophomores in the state of Alabama, they chose me and my friend,” said Carlyon. “We have the opportunity to learn from the best.”

A $12,000 grant is helping Healthy Kids expand its services in Butler County. The organization recently received the grant through... read more