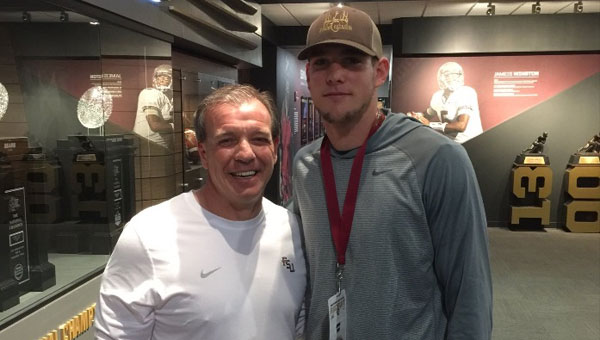 With his junior year starting to wind down, Jacob Free is now looking to the future. As the quarterback for the Brantley High School Bulldogs football team, Free has been offered the chance to tour multiple college campuses over the past few years, and is seriously weighing his options.

“It’s a long process, a lot of visiting, a lot of traveling, but I enjoy every minute of it. It gets me ready for college,” said Free.

“I’ve been to Louisville, Troy, Arkansas, FSU, Alabama, Auburn, Ole Miss, Mississippi State, Kentucky and I’m going to South Alabama this weekend. After that, I’m going to New Orleans for my first football camp for the summer.”

Free started his career at BHS in the sixth grade after transferring from Luverne High School. Since starting at BHS, Free has played baseball and football. Up until his ninth grade year, his main sports focus was baseball, but after getting a little more involved with football camps, he soon believed he could make a living out of this sport.

“All my life I’ve actually been saying that I want to play baseball, because that’s always what I loved. My ninth grade summer going into the tenth grade I started doing football camps, and people started contacting me. From then on, I said well, if I’m going to be able to do this in college, I better get serious about it,” said Free.

While Free still has more than enough time to reach a final decision on where he will go, he plans to make his choice before the start of his senior season in order to give his undivided attention to his team.

“It takes a lot. You can’t just go out there and show up and be as good as everybody else,” said Free.

While the decision is not final, he currently has a good idea of which school he would like to attend. He knows that out of all the colleges he has toured, there really is no bad choice for him.

Upon entering college, he plans to pursue a degree in sports management. Free also takes into account the atmosphere of the colleges when he tours, and he hopes to find a school with an excited student body and a medium-sized campus.

Ashley Kilcrease, BHS head football coach, has had the opportunity to work alongside Free for the past four years, and is proud of Free’s accomplishments.

“He’s extremely gifted. Whatever he does, he’s usually good at. God’s blessed him with a big body and great ability, and people are taking notice of that,” said Kilcrease.

Free has enjoyed his time at BHS and attributes much of his success to the staff of BHS and his fellow students.

“I love it here, and I believe that where I am today with football is because of the coaches here and everybody here,” said Free.

While there is still a long road ahead filled with practicing and scholastics, Free and his coaches feel confident that the task will not be too much for him to handle.