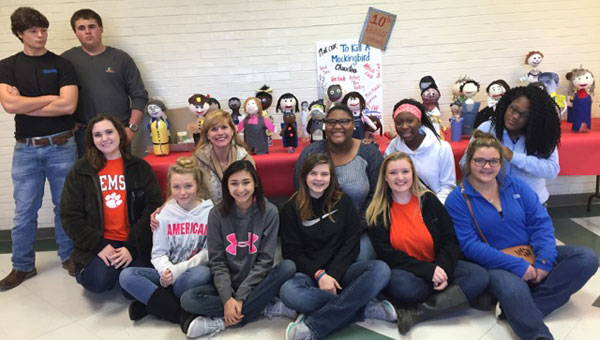 Last week the world said goodbye to one of the south’s most famous writers, Harper Lee. At the age of 89, Lee had created characters which impacted the world, such as the feisty Scout Finch and the noble and just Atticus Finch

Her legacy continues to this day in local schools, as well as schools across the nation. One school in particular found the works of Lee to be fascinating and well worth the read.

Brantley High School’s tenth grade students began studying the book “To Kill a Mockingbird” in the English class of Tracey Layton, tenth through twelfth grade English teacher at BHS. Layton has always had a fondness for the works of Lee and wanted to find a way to bring the stories to life for her students.

“There’s so many life lessons in there for students and adults,” said Layton. “There’s so much from what Harper Lee uses with Atticus and even to the childlike innocence and simplicity of Jem and Scout. Just about every day we would have a life lesson that we could apply outside of English.”

Along with reading the novel as a class, the biggest project set for the class gave them a chance to express their creativity. The students were asked to pick any character from the novel and create a bottle biography. Students took two liter and 16 ounce bottles and decorated them based on the character that stood out to them the most, whether for good reasons or bad.

“This was a good way of getting them from reading it to actually putting it into something as far as seeing the traits,” said Layton. “We did a lot of activities with ‘To Kill a Mockingbird’, but I had seen this done before and I had been dying to do it. So, I was trying to think how could they actually put the characters visually into something they could see.”

Grace Grosenbach and Emily Sims participated in Layton’s project and both enjoyed the creative aspect it brought to the classroom.

The pair had previously read “To Kill a Mockingbird” and enjoyed the new perspective that the classroom discussions brought to it. Along with the bottle biography, the class had multiple other projects to complete during the process of studying the novel, such as journal entries and critical thinking scenarios.

“We’d both read it before, we’re both bookworms. But when we got into Ms. Tracey’s class, it was more about analyzing it and understanding it. You can read a book on your own, but when you read a book with a group and actually talk about it, it becomes a different book,” said Sims. “You notice things you’ve never noticed before, and it helps for us to have read it before to help other people understand it.”

After seeing the posts on social media announcing the death of Lee, the pair began to realize what a treasure her works really were to the current generation. Grosenbach also believes that the outpour of social media postings will help educate more people because of the popularity social media plays in today’s society.

“I think the media surrounding her death will actually help a lot more people get into it, because people will see how much she meant to people, even though they may have never known her,” said Grosenbach.

The lessons taught by Lee are as relevant today as they were when the novel was first written. It’s this fact that keeps Layton and those literary loving students inspired to take to heart the teachings from the book.

“I think it will be even better for people in the next generations to read the book, knowing what a legacy she left,” said Sims.