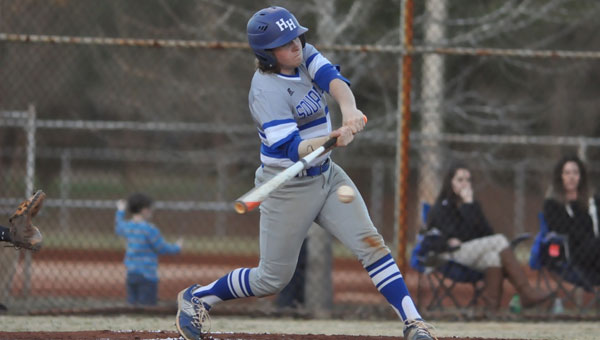 Highland Home School Flying Squadron senior Cole Brightwell successfully gains a hit against the Greenville High School Tigers last Thursday. The teams faced off in a double header, and the Flying Squadron returned home with two victories under their belt. The Flying Squadron boasted a score of 8-0 for the first game and 10-3 for the second, making their current season record 3-0. (Photo by Beth Hyatt)

“On the Greenville games, I was happy with the way the team competed in both games and finished strong. Our pitchers did an excellent job on the mound that night. They knew they were on a pitch count limit and were very efficient with it,” said Highland Home School varsity baseball coach Jonathan Jordan.

The Flying Squadron won a double header victory against the GHS Tigers last Thursday with the score for the first game ending in 8-0 and the second in 10-3.

The winning pitchers for the first two games were junior Chase Mansmann and freshman Noah Phillips.

Senior Cole Brightwell closed out both games and had a combined throwing of three and one-third innings with no hits, four strikeouts and no earned runs.

The Flying Squadron kept up their winning spree with a 7-4 victory against the Goshen Eagles.

“The Goshen game was a pitching duel that went nine innings. It was one of those games that could have gone either way where one big play or hit was going to win it,” said Jordan.

“We were just fortunate enough to come out on top.”

At the top of the ninth, the game was tied 3-3. Freshman Daniel Phillips hit a single with one out to get on base.

“He ended up scoring on a wild pitch for the go ahead run. We scored three more runs in the inning capped off by an RBI single from junior Cody Brown,” said Jordan.

The Flying Squadron is set to play against the Brantley Bulldogs on March 1 at 5:30 p.m. at home. Even with their current winning streak, Jordan continues to push the team to be better after each game.

“We always focus on getting one percent better everyday in preparation for our next match up,” said Jordan.