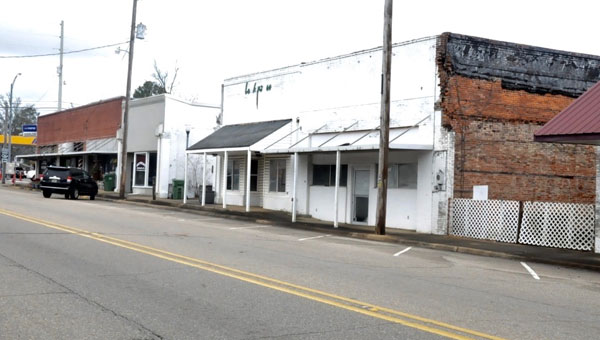 The downtown area of the Town of Brantley now stands almost abandoned. A few concerned business owners have recently decided that in order to see progress in restoring the shops, action must be taken. A GoFundMe campaign was recently launched to raise funds for repairs. (Photos by Beth Hyatt)

It’s no secret that many small towns across the nation have faced difficulties continuing operation over the years, and one concerned business owner shares this concern for downtown Brantley.

Michael Barnes, owner of Michael’s Southern Foods in downtown Brantley, has been a part of the Town of Brantley for the past 41 years, and is saddened by the current state of the area.

“There’s nothing ever going on down there. The buildings are falling apart, and anybody who owns one cannot afford to fix anything. They’ve had grant writers in Brantley forever, and nothing ever comes to the downtown stuff to make it look better,” said Barnes.

Barnes recently decided that it was time that he take matters into his own hands by starting a GoFundMe campaign for the downtown area. So far, the campaign has raised $100, and Barnes is hopeful that more people will decide to donate.

“I heard about it and thought I might as well try it. It’s worth a shot anyway. You may not get what you want, but you might get something. And if you don’t get anything, you haven’t lost anything,” said Barnes.

According to Barnes, many of the businesses in the downtown area of Brantley are in need of repairs and paintjobs, some necessary for functioning and some to make the buildings more attractive to customers.

Barnes says that now is the peak time to have a downtown area that is eye-catching because of the influx of beach-going traffic.

“As soon as March hits, it will be bumper to bumper every weekend, but it just looks so bad. Before long, there won’t be anything left down there,” he said.

It is Barnes’ hope that the funds raised from the GoFundMe campaign can be split amongst the downtown business owners to fix needed repairs first.

“When I moved there, there was something in every building. There were two or three factories and wood yards, but that’s all gone now,” said Barnes. “There’s a lot of little towns all across the country in better shape than ours. Somehow they’ve gotten something to help them,” said Barnes.

Beth Rogers, mayor of the Town of Rutledge, fears the same fate may come to her community if something is not done. She, too, has considered finding some kind of funding method for her area, and saw the GoFundMe campaign for Brantley on Facebook, which sparked her curiosity.

The two continue to search for methods that will help their communities, and both are hopeful that the social media aspect will gain the campaign more circulation.

When the Houston family first entertained the idea of adoption, they had no idea that they would soon be blessed... read more