Womack: We can do better 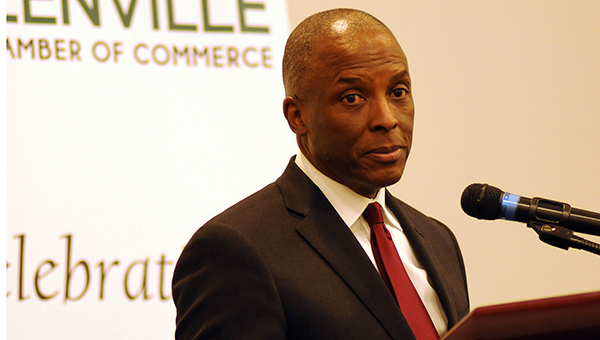 Like one of his idols, Dr. Martin Luther King, Jr., Chris Womack has a dream.

“There are a lot of wonderful things that occur in Greenville, Alabama that I am so very, very proud of,” said Womack. “Yeah, there are things we can do better. I want to see all the communities come together and work more collectively together. Whether you are black, white, Hispanic, Protestant, Catholic or Jew — no matter what you are, let’s all come together. Whether you live on Baptist Hill or Methodist Hill or City School Hill, it doesn’t matter which hill you are on. Let’s all come together and do things together for the betterment of this community.

Womack, a graduate of Greenville High School, is executive vice president and president of external affairs for Southern Company. He said he has always been proud to call Greenville home, but a recent trip to the Camellia City for longtime city councilman James Lewis’ funeral ended in a visit that made him swell with pride.

Greenville Mayor Dexter McLendon was giving Womack a rundown of some of the city’s projects. He told Womack he had something he needed to show him.

“He was like a little child he was so excited,” Womack said.

McLendon pulled out a photograph of Dr. Martin Luther King that was taken in 1965 at Greenville’s Harrison Street Baptist Church.

“I was born in 1958,” Womack said. “I remember, because we lived on 413 Harrison Street right across from Harrison Street Baptist Church, there was some chaos and commotion going on over there. I had no idea what was going on. When I saw that photo, and to see Dr. Martin Luther King, to see John Lewis, to see them photographed at Harrison Street Missionary Baptist Church, that was an incredible prideful moment for me about this mayor and about this city because he was excited like a little kid to know and to see the history of Greenville, to see that Dr. King was here carrying his message of equality and also about having dreams.”

Womack was a dreamer from an early age. Those dreams have served him well.

“In June of 1979 I left home and exited on Exit 130 heading north on Interstate 65 headed to Washington, D.C. with no idea what was going to happen to me in my life,” Womack said. “But I had an incredible foundation that was developed here in Greenville. No doubt my faith in my God was an important part of my life, but I was also given the ability and the intestinal fortitude to say, ‘OK, I can do whatever I want to do.’ I had no idea what I wanted to be, but I had some idea of where I wanted to go.”

The Greenville native landed a job working for the U.S. House of Representatives as a legislative aide to Leon Panetta and as staff director for the Subcommittee on Personnel and Police, for the Committee on House Administration.

“Clearly Mr. Womack has been very successful in his career, and he’s give back to others in the communities he’s lived as evidence by his honors,” said Rod Cater, Greenville Area Chamber of Commerce board member and general manager of Alabama Power. “But how does someone like that become so successful? I believe it’s a product of your environment. Your environment is made up a lot of things, but there are four primary things that make up an environment that influence each and every one of us — your home, your church, your school and your community. For Mr. Womack, all of those are right here in Greenville.”