Mayor highlights city projects in State of the City address 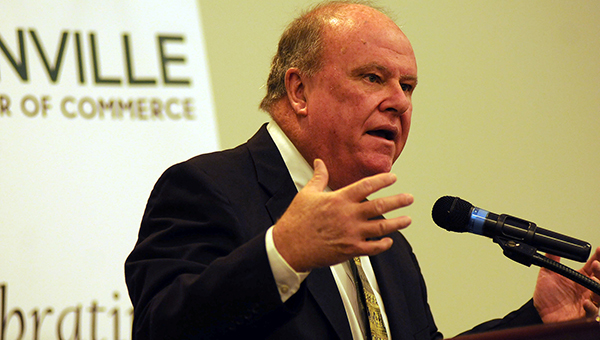 The City of Greenville will construct a park downtown to honor veterans.

Greenville Mayor Dexter McLendon made the announcement at Thursday night’s Greenville Area Chamber of Commerce banquet during his State of the City address.

A plan to construct the park has been in the works for more than a year, as the city has purchased and demolished crumbling structures downtown, the latest of which was demolished on Wednesday.

“The garden club is going to work with us to make this a beautiful area,” McLendon said. “All we’re really going to have to do is turn (city horticulturist) Jennifer Stringer loose. This project will take time. It will not happen overnight. We have to budget for it, but we’ll get it done, and it will be something nice that we can be proud of.”

The veterans park isn’t the only park in the works, according to McLendon.

McLendon said the city still plans to construct a dog park, walking and biking trails near the YMCA.

In 2013, the city purchased approximately 31 acres of land located near Academy Drive, New Searcy Road and the Greenville Bypass from ABCD Corporation for $108,000 in hopes of one day creating a recreation area.

At the time of the purchase McLendon said it could take up to 10 years to complete the project.

McLendon also announced that along with Alabama Transportation and Rehabilitation Investment Program (ATRIP) paving projects, the city also plans to fund an additional $500,000 to $600,000 in paving projects throughout the city.

More changes could be coming to Exit 130, according to the mayor.

“The state is continuing to look at that,” he said. “It’s a lot better than it was, but I think in the next year there will be even more changes.”

McLendon told those in attendance Thursday night that the city is also still actively pursuing a National Guard armory.

Greenville has been without an armory since December of 2011 when National Guard officials closed Fort Robert E. Steiner. In 2013, Alabama National Guard spokesman Capt. Andrew Richardson, there are plans to build an armory in Greenville “at a future date.”

“We’re going to continue to talk and replace our National Guard armory with something very special,” McLendon said. “This would be a game changer.”

In the past, McLendon has referenced a “super armory,” which is a central training point for units across the state.

While Richardson did not use the term “super armory,” he did say that most of the National Guard’s future armories will “house more than just Alabama National Guard units,” and that “in an effort to better utilize space and resources (the National Guard) will partner with other government agencies and departments.”

On the economic development front, McLendon said there are four projects currently considering the Camellia City, and three restaurants that have shown interest in Greenville.

“We’ve been pretty aggressive over the years, we’re going to continue to be,” McLendon said. “A lot of things are starting to happen now, where people are calling us instead of us having to call on other people. It’s building relationships in other areas of the state.”

The city will host a meeting of members of the Delta Region later this year. The meeting, which will features members from eight states, will mark the group’s first meeting in the State of Alabama.

“This will give us an opportunity to build more relationships and showcase our town,” McLendon said. “It’s extremely important.”

McLendon said the city is moving forward with plans to construct a building at Sherling Lake, which can be sued for community meetings, as well as economic development. The previous structure was destroyed by a tornado in 2011.

“I don’t think there’s a town of 8,100 people in the state that has any more projects going than we do,” McLendon said.