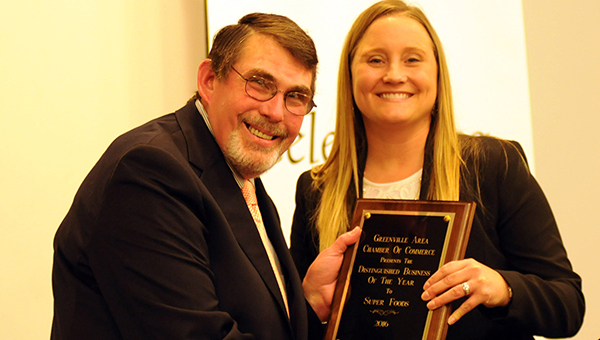 The Greenville Area Chamber of Commerce recognized business and community leaders during its annual banquet Thursday night at the Wendell Mitchell Conference Center on the campus of LBW Community College.

Winfred E. Boan was presented the Distinguished Citizen of the Year award.

Boan, a World War II veteran, is the founder of Boan Contracting Company, which installs gas, oil, water and sewer pipelines across the southeastern United States.

In 1978, Boan, who started the company with just one dump truck and a backhoe, moved his business to the Camellia City and became active in the Greenville Area Chamber of Commerce and other civic events. Boan Construction Company, which maintains offices in Greenville and Fairhope, now completes infrastructure projects from Jacksonville, Fla., to Houston, Texas.

“Our recipient is a titan of the community,” said David Scott, president of the Greenville Area Chamber of Commerce.

The Chamber also recognized The Greenville Advocate with its inaugural Milestone Award.

In October, the Advocate, which was founded by Gen. J.B. Stanley, celebrated its 150th anniversary.

“This award does not only honor someone by the length of the work in this town, but also the quality of their work and what they have done in our community,” said Dr. Jim Krudop.

The Advocate has ranked in the top three of General Excellence, the Alabama Press Association’s highest honor, 11 times since 2005, including five first-place finishes, the last coming in 2014. It has also received the APA’s Advertising Sweepstakes Award, the top award for advertising, 14 times since 2001.

“The dream of Gen. J.B. Stanley to provide Greenville and Butler County with a first-rate newspaper is alive and well,” said Krudop. “The Advocate supports numerous community groups, events, projects and activities. … The members of the staff are involved in the community too. They are making a difference in their churches and in our civic organizations. They are Civitans, Rotarians, Kiwanians, Lions — in other words they are actively involved today.”

Super Foods was honored as the Chamber’s Distinguished Business of the Year.

The grocery store has served the Camellia City for nearly four decades and has actively supported a number of organizations throughout the community.

“Over the years, Super Foods has donated hundreds of thousands of dollars back into our community in money and goods to a host of organizations such as the American Cancer Society, Butler County Relay for Life, The American Heart Association, Safe Harbor, L.V. Stabler Memorial Hospital, LBW Community College, the Greenville Police Department, the Butler County Department of Human Resources, and many others,” said Tracy Salter. “It is a business that is relied on heavily by the community and it is one that very much recognizes the support of the community it serves by striving to go above and beyond to be a positive force in the area.”

The Chamber also recognized Brian Moss State Farm as the New Business of the Year. In order to be eligible for the award, the business must have been in operation for at least six months, and be a member of the Chamber who is active in the community.

“Just more than a year ago, he called the Chamber and said he was moving to Greenville, Ala., and said he’d be opening a new business,” Francine Wasden, executive director of the Greenville Area Chamber of Commerce. “At the time he was unable to tell me what type of business. If you know me, you know my wheels were turning, and I was wondering what it could be. A few weeks later he opened the door to the Chamber and came and introduced himself. It was Brian Moss. … On May 1, 2015, Brian opened Brian Moss State Farm. From that day forward he hit the ground running. He’s been so active in our community volunteering his time and sponsoring our events.”

Fallen officers’ names to be added to memorial

The names of officers that gave their lives in service to their community will be added to the memorial outside... read more