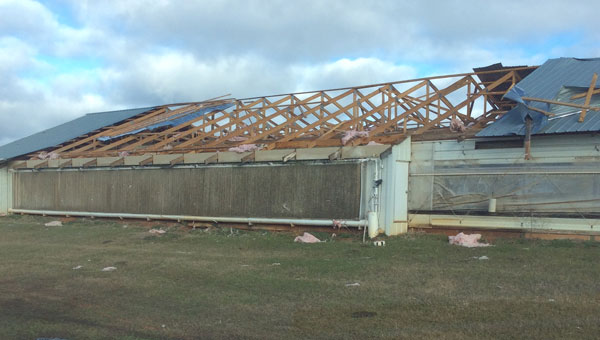 After the extreme Monday night weather experienced by citizens of Crenshaw County, structures such as this chicken house on Jones Bridge Road must now start the restoration process.

Monday night Crenshaw County faced near-tornadic weather, which caused damages county-wide. According to Crenshaw County Emergency Management Agency (EMA) director Elliott Jones, the department received no reports of injuries during the time of the storms, but structures in the south end of the county such as a barn on East Emmett Avenue in Brantley and several chicken houses just off of North Goshen Road in the east side of the county received substantial damages.

Those in the north end of the county were subject to strong straight line winds that took down many trees along the roadways.

“It is very important to me that our citizens stay as safe and informed as possible during severe weather. Our storm shelters are always available, as well as our warning systems are in place. As my office is closed after 4:30 p.m., I want everyone to have my cell number for after hours use: (334)508-2434. I am here to help,” said Jones.