After serving two years as the head basketball coach for the Crenshaw Christian Academy Cougars and Lady Cougars, John Hii will be taking a job at Grace Baptist Academy in Ocean Springs, Mississippi.

“It’s a brand new opportunity, brand new everything. Being so young, it’s fun to be able to move around and pick up and leave with a new job like I’ve been blessed with. I’m super excited,” said Hii.

In his two years at CCA, Hii served as a history, remedial math and physical education teacher as well as a basketball coach.

“John is a good, hard worker. He did everything I asked him to do in the classroom. If I thought he needed to do something a little different, he was eager to accept that challenge and work that direction. We will miss him, and I think he will do well,” said Gary Driver, headmaster of CCA. 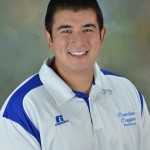 In his new position in Mississippi, Hii will serve as assistant principal and will take over as principal next year. He will also serve as the assistant coach for basketball and has already had the opportunity to sit on the bench of a few of their games. Grace Baptist participates in basketball year-round, and Hii is more than ready to continue in the sport he loves.

CCA’s athletic committee is currently in the process of preparing for hiring. An announcement should be posted in the following weeks through the Alabama Independent School Association (AISA) network, and the hiring process will begin shortly after that.

“John is a very focused young man. He’s very diligently direct in his intention and in a plan. He and I talked last summer, and he has a seven-year plan to be at a certain point in his life in seven years. As far as work ethics are concerned, he is very oriented toward reaching a goal,” said Driver.

“I admire him for having those long-range goals and something came up that gave him an opportunity that he felt like was a good situation for him, and I told him he could go with my blessing.”

While Hii has many fond memories of his time at CCA, his favorite to date was winning the AISA basketball state championship last year.

“That was my favorite moment from my time at CCA; there was never a doubt, I will never ever forget that moment,” said Hii.