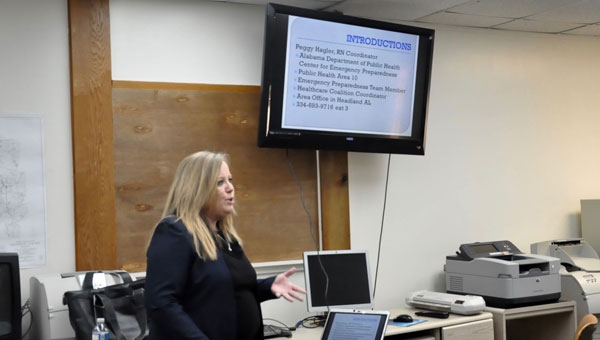 The Crenshaw County Emergency Management Agency (EMA), the Alabama Department of Public Health (ADPH) and many other authorities in Crenshaw County met last week to begin organizing a Healthcare Coalition for the county.

For years, Crenshaw County has been a member of the Healthcare Coalition, but now these citizens feel it is time to rebuild the team and play a more active role in the community.

“A healthcare coalition is a group of healthcare organizations, public safety and public health partners that joins forces for the common cause of making their communities safer, healthier and more effective,” said EMA director Elliott Jones.

“Coalitions are forming all around the United States to support communities before, during and after disasters and other crises. I am on the South Alabama Healthcare Coalition Steering Committee. This committee works together to plan and designate procedures to be taken in case of a major need for healthcare support in any given area.”

The meeting was held in the EMA office and welcomed any and all officials from departments such as sheriff and police departments, physicians, nurses, funeral home directors, veterinarians and more.

The group hopes to hold a well-rounded and diverse group of members to be able to combat emergencies when they occur in the county.

Peggy Hagler, Nurse Coordinator with the ADPH, served as the guest speaker for this meeting, and encouraged the citizens in attendance to continue searching for those in the community who could also help when needed.

“It is a way for us to all get together to share with one another what we’re doing in the emergency preparedness in our area. All of us at this meeting have something in common,” said Hagler.

“We all have a role if there was an emergency or crisis in our area. The purpose of doing this is so we can all meet together and meet each other, because you don’t want to meet each other when the crisis is going on. You really do feel more comfortable working with someone if you have met them beforehand.”

The meeting gave brief overviews of topics such as the recent travel-related case of Zika virus found in Morgan County, emergency preparedness for inclement weather and emergency situations and also gave guests the chance to ask specific questions about their roles in a crisis.

Hagler also described the importance of having organizations such as these in the community, and gave vivid examples of past situations around the state where Healthcare Coalition members were called to action in a moment’s notice.

More meetings will be planned for the future, and anyone interested in becoming part of the Healthcare Coalition can contact the EMA office and sign up.