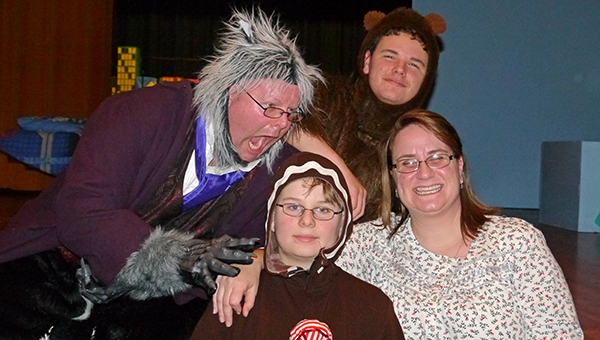 Rockerious Thigpen played Rumpelstiltskin, sporting his best Sherlock Holmesian cape and deer stalker hat and assisted by the chatty Ugly Duckling (Ally Johnson). The duo encountered everyone from the Three Bears and the Three Little Pigs to Cinderella and her stepsisters as they tried to determine just who was the culprit at large.

The play was something of a family affair for the Pryors. Oldest son Laun portrayed the oversized Baby Bear, while youngest son and stage hand Jacob played the Gingerbread Man on Friday night in place of Atchison. Naomi Pryor, GHS English and drama teacher, served as both stage hand and Little Red Riding Hood’s “Grappling Granny.”

Plenty of giggles, guffaws and chuckles came from an appreciative audience, who gave the cast members a standing ovation Friday night.

“These kids are adorable,” said Naomi Pryor. “They have done such a good job.”

Ivy Brooks,who portrayed Cinderella in the GMS production, said she took on the role just three weeks before the performances. “Someone else dropped out and I got the part. I was nervous I’d forget something. But it went OK!”

Ardaisia Coleman as Snow White and Grace Gipson as Nerdy. Reagan Smith served as lighting technician for the production.