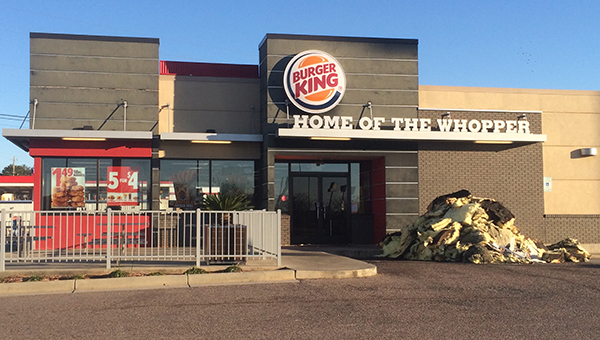 The Greenville Fire Department responded early Tuesday morning to a fire at Burger King. According to Chief Chad Phillips, the restaurant has significant damage from either fire, heat or smoke. (Advocate Staff/Andy Brown)

Chief Chad Phillips said the fire department received a call at 12:04 a.m. of a fire at Burger King. When firefighters arrived on the scene, smoke was visible inside the restaurant.

“The first arriving engine company made an offensive interior attack on the fire, which was located in the void space above the ceiling tiles,” Phillip said.

Phillips said the department’s investigation indicates the fire was started by a HVAC unit on the roof.

“When we started our overhaul operations we had a significant portion of the insulation either burned, or damaged by heat, and needed to be removed,” Phillips said. “This entailed having to remove most of the ceiling tiles in the restaurant to gain access to the damaged insulation. The restaurant has significant damage from either fire, heat and/or smoke, mainly in the void space above the ceiling tiles.”

According to Phillips, it took firefighters less than five minutes to get the blaze under control. The fire department was on the scene for just more than three hours.

Glendale Avenue, which has been closed for more than a month after heavy rains caused a portion of the road... read more