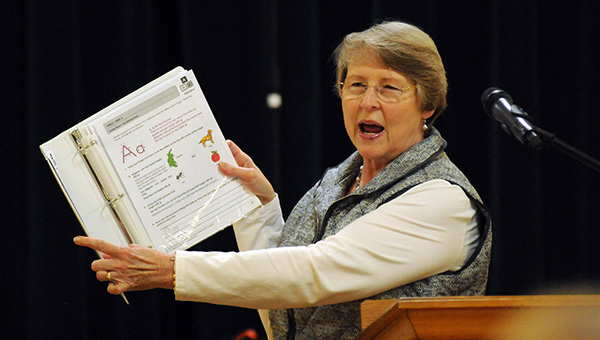 Anita Halaker knows a thing or two about teaching children.

Halaker, a retired educator, spent a number of years teaching students in third through eighth grade. But when it came to teaching her 3-year-old grandson, she didn’t quite know what to do.

“I thought what do you do with this age?” Halaker said.

Halaker turned to HIPPY, or Home Instruction for Parents of Preschool Youngsters. HIPPY is an evidenced-based family support model that works directly with parents in their homes to give them books, activities and skills needed for them to take responsibility for preparing their children for school.

“The HIPPY program has really blessed us as a family,” she said. “… This a program that will help anyone that can get into it. My children and grandchildren went to preschool, but they didn’t get anything like this because you get to interact with your children when they are at home with you. It really makes a difference because they have put together a program that helps the children when they go to school.”

Halaker was one of eight speakers that shared about the impact Healthy Kids, which administers the HIPPY program, is having in Butler County during the organization’s 5th annual Healthy Kids for Kids Sponsor Invitational Luncheon Friday at First United Methodist Church.

During the luncheon, potential sponsors learned about the various programs offered by Healthy Kids, such as Healthy Kids Excel, which is a parent support program that focuses on preventing child abuse and neglect in Butler, Crenshaw, Conecuh and Lowndes Counties; HIPPY; the Child Adult Care Food Program, which aims to resolve food insecurities and combat childhood obesity in 14 counties across the state; and First Steps Early Child Development Center.

Katie Nixon’s daughter is a student at First Steps.

“It’s been amazing to see how much she has learned,” said Nixon. “She comes home every day and tells me what they talk about in class and what they’ve done. … She tells me about the letter of the week and the color of the week. We were riding down the road the other day, and I stopped at a stop sign. She told me that was an octagon. A 3 year-old knew the word octagon. That just blew my mind. I chose First Steps because it is very child led, and I believe that’s how children learn best. She’s not just a little drone. She gets to be a child, but at the same time, the teacher incorporate the lessons into the play.”

To learn more about Healthy Kids and the programs it offers visit healthykidsal.org.

David Hamilton, the proprietor of Mishkan Ministries, combined his passions for ministry and 16 years’ worth of architectural knowhow and... read more