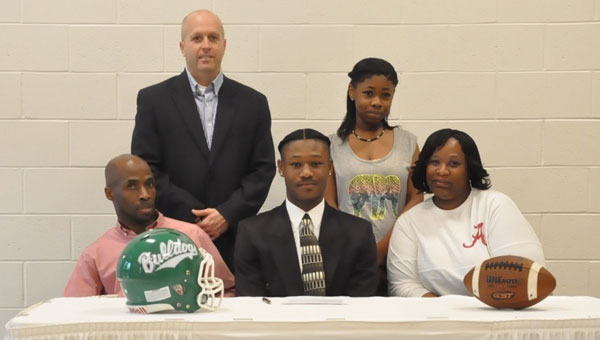 With the collegiate signing days officially beginning across Alabama, one Brantley High School football player felt the call and pledged his loyalty to a college in Iowa.

Savion Jones decided on Sunday that he was being led to play for the Iowa Central Community College Triton football team, and his BHS family was right behind him with support.

“It’s a really big junior college, so I decided to go there. I’m very excited. I know it’s not going to be like high school, so I know I have to grow up a little bit and get my ducks in a row,” said Jones.

Iowa Central is similar to LBW Community College when scholastically compared, but in size of student body it rivals Troy University, according to BHS head football coach Ashley Kilcrease.

A signing ceremony was held in the new BHS gym yesterday morning, and Jones officially signed the agreement to play for the Tritons.

This signing served as the very first held in this facility, and future signings are slated to take place there in the future.

Jones remembers his time at BHS fondly and will miss his family and the friends he has made over the years. When asked what his favorite memory about BHS was, his response was,

“Everybody, all of the coaches, all of the players from my sophomore year to now. I love all of the teachers and Brantley in general,” said Jones.

Kilcrease has known Jones for many years now and has worked closely with him over the past three years to enhance his football skills.

“I am so excited for him. This came about Sunday and he’s worked really hard. I don’t think he’s ever missed a workout, to be honest, in three years of starting on varsity. We felt like he would get a chance, and he did, so we’re excited. Junior college is really going to be a good thing for him and a good fit for him,” said Kilcrease.

Jones is expected to head to Iowa Central in July to begin his work with the Tritons.

The Crenshaw Christian Academy Cougars advanced to the AISA Final Four this Tuesday after a 54-31 win over the Patrician... read more