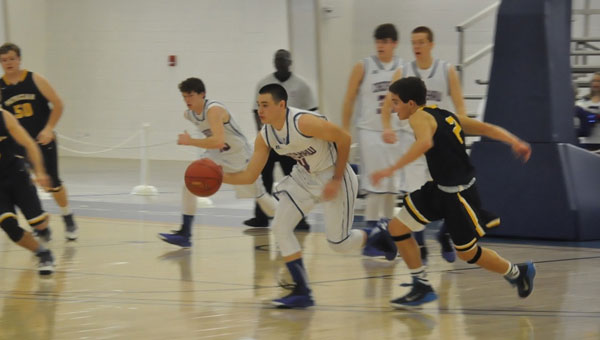 The Crenshaw Christian Academy Cougars advanced to the AISA Final Four this Tuesday after a 54-31 win over the Patrician Saints. (Top): Cougars senior Milos Zeradjanin drives down the court during the first half of the Cougars’ matchup with the Saints. (Bottom): Cougars senior Stevan Smiljanic goes for the ball at tip off. (Photos by Beth Hyatt) 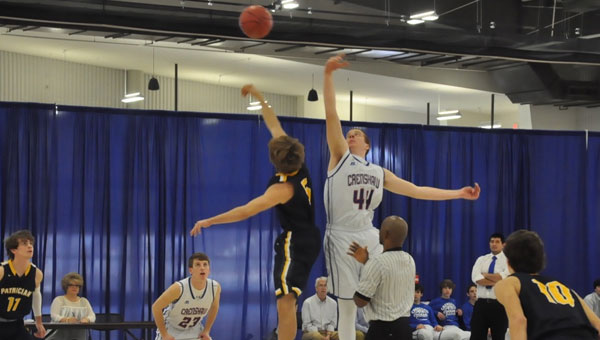 The Crenshaw Christian Academy Cougars returned to the court of the Elite Eight competition on Tuesday to vie for the title of Alabama Independent School Association (AISA) Class A Final Four Tournament champions.

“The great thing about this team right now is that I have seven players that on any night can score double digit points. That is such a blessing down the stretch. It makes this team fun to coach and it makes us a better team because we aren’t relying on one person to score. We try to be as well-rounded as possible, and I think it’s really paying off for us,” said varsity basketball coach, John Hii.

The Cougars claimed a 54-31 victory over the Patrican Saints Tuesday morning and will compete against Abbeville Christian Academy Friday at 1:30 p.m. at the Multiplex at Cramton Bowl in Montgomery.

“There’s no doubt that we are playing our best basketball right now. If you watched the game today, you could see that everybody was on the same page and there was no griping about who was scoring. It was one big machine,” said Hii.

The Cougars fought hard in the first half of the game and kept the lead over the Saints throughout. Going into half-time, the Cougars led 33-13.

Hii is excited to return to the Final Four and fight for the title once again. For the seniors in the group who competed last year, this year brings a new challenge and a new sense of urgency.

“It’s a good experience for them. All of the seniors this year have experience because we won last year. It’s especially good for our younger guys for them to know what it takes,” said Hii.

The Cougars will take on the Abbeville Generals on Friday, and will have the chance to advance to the last round of the tournament on Saturday if they secure a win.

With the county, state and national primary just less than a month away, deadlines are approaching for Crenshaw County residents... read more