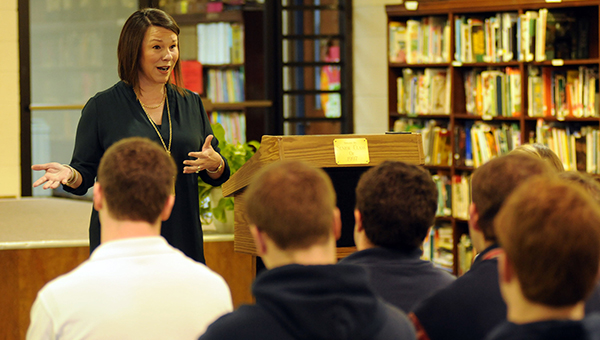 U.S. Rep. Martha Roby shared with Fort Dale Academy’s senior class how she ended up on a path that ultimately led her from a high school student hoping to land a job in the music industry to a career in public service. (Advocate Staff/Andy Brown)

Martha Roby’s life ended up on a very different path than she thought it would as an 18-year-old senior living in Montgomery.

Roby, who is serving her third term in the U.S. House of Representatives, had hoped to land a job in the music industry.

“Being from Montgomery, I had to look well beyond Montgomery to figure out how to get involved in the music industry,” Roby said. “At the time Belmont University in Nashville, which has a great program now, really didn’t. So the closet thing was New York University, which has a music business program. So I applied to NYU and got accepted, and my parents let me go. I lived in New York City for four years, and I worked for various music labels.”

While working for Columbia Records, Roby sought out advice about how to advance her career. She was told she needed to either earn a law degree or her master’s in business administration.

That led Roby back to Alabama to Cumberland School of Law at Samford University, and ultimately one step closer to Washington, D.C.

During her spring semester of law school, Roby attended her brother’s high school graduation, and heard a message that changed her vision for her future.

Jay Rye delivered the keynote address at the graduation ceremony. His message was simple.

“Go to college. Do what you have to do, but come back. Come back to Alabama.”

Roby heard him loud and clear.

“I still had my heart set on working in the music industry, but it was at that moment that I decided I was going to stay in Alabama,” she said.

Roby would go on to practice law in Montgomery, and eventually run for city council. Her time on the council gave Roby a taste of public service, which led her to run for a seat in Congress.

“It was an ah-aha moment,” Roby said of her decision to run. “It was a gut feeling that this is what I was supposed to do.”

Working in Washington, D.C. is a far cry from working in music industry. It’s certainly not where Roby pictured herself at this point in her life. That’s why it’s important to keep your head up and your eyes open, and that was Roby’s message to Fort Dale Academy’s senior class on Friday.

“What I set out to do, and what I did, are two very different things,” Roby said. “There are several really big crossroads in life, and you are about to get to that first crossroads, where you are going to make a big decision about what lies ahead for you. … What I want to say to is, set your goals. It’s great to have goals. So set goals, but keep your eyes wide open. Because you never know when you’re going to have that ah-ha moment. You never know when you’re going to get that punch in the gut that lets you know this what you’re supposed to do, and it wasn’t what you set out to do. That’s OK. The rewards can be so huge if you’re just paying attention.”

Along with sharing with the students how she ended up in Congress, Roby also answered questions on the national debt, the Syrian Refuge crisis and her role in revamping the care offered to veterans by the VA.