Robotics teams take to the ring 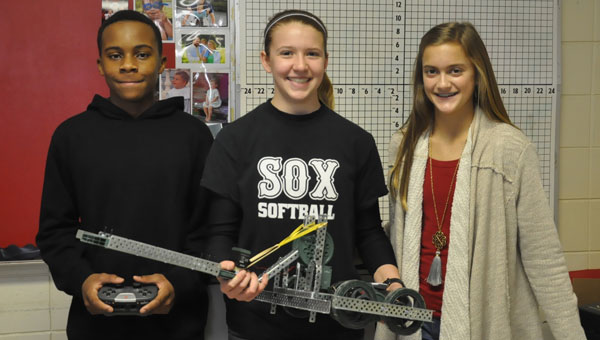 This semester, students at Luverne High School were given the chance to participate in a new organization called the Robitics Club. In this club, students have the chance to build their own robots and enter them into competitions with surrounding schools. Pictured are, from left to right, Ashton McGhee, Libbey Jones and Riley Marchand. (Photo by Beth Hyatt)

Since the recent change to block schedules, students at Luverne High School have had the opportunity to choose more electives in their open Tiger Block. For some students, this offered the chance to join organizations such as the Robotics Club.

“It is important for students to be involved in STEM (Science, Technology, Engineering and Math) activities such as robotics because it gives a different dynamic to the typical classroom setting,” said Julie Albritton, teacher at LHS and Robotics Club sponsor.  “Robotics allows learning to take place through self discovery and an exciting hands-on experience. Also, robotics may lead students to careers such as engineering and technology.”

The LHS Robotics Club was given the opportunity to meet during the week and build their own robot out of materials from purchased boxes of parts. This free-build exercise allows the students the freedom to create any kind of robot they think would fair well in competitions, and also gives the students more creativity when designing.

For the previous competition, students were asked to build a robot with an extendable claw to allow it to participate in the challenge. The challenge for this competition was to see how many balls could be scooped up with said claw and dispensed into the appropriately marked containers.

“It’s something really, really new. Luverne’s never had this. So, I thought it would be cool to try it. We’ve been working with it a lot,” said Riley Marchand.

Students took about two weeks to gather everything together and build the robots. Though the LHS group has only been together a few weeks, they have already gathered $300 of donations from parents, a $300 donation from the Parent Teacher Association (PTA) and two robots have been donated from the PTA. The group now has five robots in total.

Students from Brantley High School took first place with Highland Home School in second and Luverne in third. The next competition is slated for May 10.

“I have enjoyed watching these students interact with each other. We didn’t perform as well as we had hoped, but we had fun making history as the first group of robotics students to compete. The competition was stiff and we admire the tenacity of the high schoolers we competed against,” said Albritton.