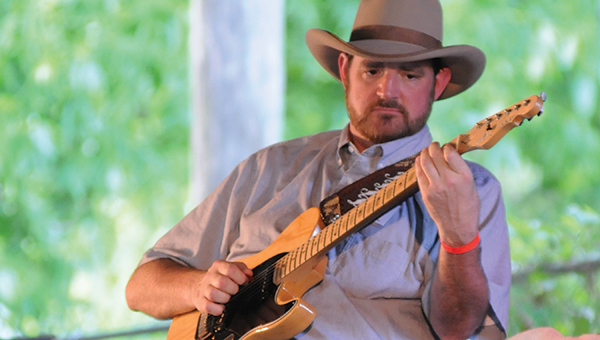 Brad Magness is one of many performers that reguarly attends the Hank Williams, Sr. Festival in Georgiana. The festival was ranked by Only In Your State as one of the top festivals in Alabama. (File Photo)

The Hank Williams Sr. Festival was ranked by Only In Your State as one of the top festivals in Alabama.

Each year the Hank Williams Festival draws country music fans to Georgiana from near and far. Fans have been known to travel from as far as Germany and Sweden to attend the festival and pay tribute to one of country music’s true icons.

Hank Williams Sr., who passed away in 1953 at the age of 29, recorded 35 singles, five of which were released posthumously, that would place in the top 10 of the Billboard Country & Western Best Sellers chart, including 11 that ranked No. 1.

“Hank has always been my favorite country singer,” Jackson said. “I’ve done two tributes to him, because I’ve always loved his music. I grew up on his songs and sang them all the time. Wherever I went I was singing a Hank Williams tune. … I was just a small kid when I first heard Hank, but his music has always stuck with me.”

It is that music, and the haunting voice of Williams, that continues to draw his fans to Georgiana for the weekend festival, which takes place just yards from the house where Williams grew up in the city where a street performer named Rufus “Tee-Tot” Payne taught the future legend to play guitar.

The Hank Williams Boyhood Home and Museum serves as a popular stop for many festivalgoers and provides a glimpse at the man behind the legend.

Museum curator Margaret Gaston reminds visitors that the home on Rose Street is where it all began.

“(Hank Williams) was 7-years-old when he moved here,” she said. “He got his first guitar when he lived here. And he shined shoes and sold peanuts at the depot, which was a block south. He attended school a block north (from the house). I like to tell people that this is where it all began. It started right here.”

This year’s Hank Williams, Sr. Festival will be held June 3-4.