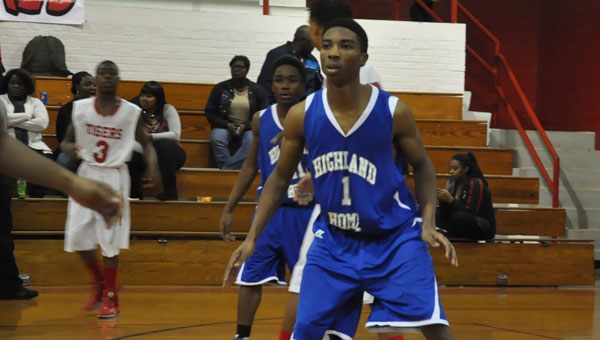 Highland Home School’s Flying Squadron senior Darion Means faces off against the Luverne High School Tigers Tuesday night. The Squadron put up a powerful fight in the fourth but fell at 62-55. (Photo by Beth Hyatt)

Home games for the Luverne High School Tigers have proven to be consistently thrilling events, and Tuesday night’s matchup against the Highland Home Flying Squadron was no exception.

Though the Flying Squadron came prepared for the task ahead, in the end the Tigers claimed a 62-55 victory.

“Highland came out with a lot more energy than we did the first half, they wanted it a little bit more than we did. They jumped on us, and we had to fight back. We didn’t play as well, but we regrouped at the half and were lucky to come out with a win,” said Luverne varsity boy’s basketball coach, Richard Dorsey.

Both the Tigers and the Flying Squadron excelled in keeping the competition on their toes, but the bulk of the fire and excitement took place in the final quarter.

Going into the fourth quarter, it was touch-and-go for the Tigers with a tied score of 40-40, but a 3-point shot by Luverne’s own senior Jontavious Chambers untied the score and gave the Tigers the momentum they desired. Much of the game’s excitement culminated in this final quarter, with back-and-forth scoring.

As the Tigers entered the final quarter, Dorsey hoped that the past week’s preparation in slowing down the game would come in handy for the Tigers.

“If we could settle down and not turn the ball over, we could be victorious,” said Dorsey.

Shawn Sellers, varsity basketball coach for HHS, took on the challenge of reviving the Flying Squadron this year and could not be more proud of the performances his team has put forth.

“I hate losing, but I think everything happens for a reason. I’m learning to appreciate these kids so much; they are not quitting at all,” said Sellers.

The Squadron will continue to Improve on keeping the team focused on playing their hardest throughout the entire game, and will take this focus into future games.

“The biggest thing we’ve got to improve on is playing four quarters,” said Sellers.

“Both of those kids didn’t quit, and they played like upper classmen,” said Sellers.

The Flying Squadron will travel to Central Lions in Hayneville today at 4:30 p.m. and will also face off against the Georgiana Tigers in Georgiana on Friday at 5:30 p.m.

The next game for the Luverne Tigers will take place tonight at 4:30 p.m. at home against the Greenville High School Tigers.