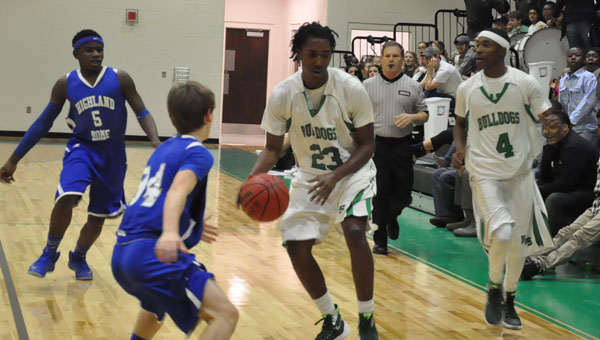 Brantley High School’s Bulldog sophomore DAndre Sinclair and senior Moses Thomas make their way down the court as Highland Home School’s Flying Squadron freshman Donavon Roberson and sophomore Connor Price block. The Bulldogs played fiercely and pulled ahead in the second quarter and gained enough momentum to take home a 73-52 victory. The Bulldogs will play the Florala Wildcats at home on Friday starting at 4:30 p.m. (Photo by Beth Hyatt)

Last Thursday, the Brantley High School Bulldogs faced off against the Highland Home Flying Squadron at Brantley. While the Squadron played fiercely, the Bulldogs were able to pull ahead in the second quarter and gain enough momentum to take home a 73-52 victory.

“I thought for the most part our guys played hard. I think we still need to work on our execution, getting set up and playing better basketball. But I was really please with how hard we played. I think the guys will start to come around and work the right way,” said Parks.

Brantley senior Zach Bryan helped the Bulldogs gain momentum at end of second by gaining a 3-point shot to take them into half-time, which gave the team a spark and carried them into the next quarter.

The Bulldogs will play Friday against the Florala Wildcats at home starting at 4:30 p.m.

“I thought our kids played hard never quit and represented our school and community very well. Any time Highland Home can beat Brantley two out of three games, it’s a good year and a great building block for our program,” said the Highland Home varsity boy’s coach, Shawn Sellers. The Flying Squadron will travel to Central Lions in Hayneville today at 4:30 p.m. and will also face off against the Georgiana Tigers in Georgiana on Friday at 5:30 p.m.

Cheryl Nelson has always had a passion for decorating, and after retiring, she was finally able to turn that passion... read more