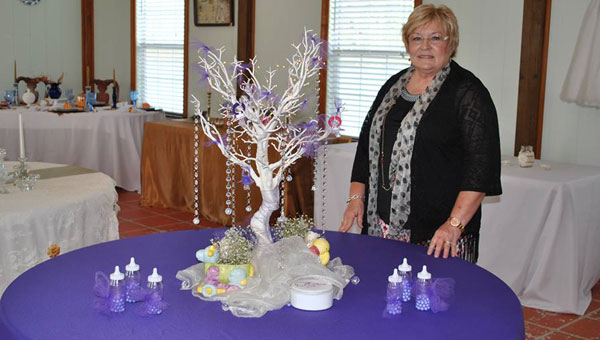 Cheryl Nelson has always had a passion for decorating, and after retiring, she was finally able to turn that passion into a career. Nelson recently began her own business called, “Cheryl’s Creative Events Designs,” and has the means to decorate for many different receptions, parties and weddings.

It’s not everyday that a person gets the chance to turn his or her passion into a ca-reer, but for Cheryl Nelson, her dream is finally realized.

After serving as the unofficial decorator and event planner at her previous job, Nel-son discovered that she had quite a knack for decorating venues and organizing events.

“I’ve always enjoyed decorating for parties, and I’ve done it for so many years that it just kind of became second nature,” said Nelson. “I have also enjoyed going into people’s houses and just helping to decorate a room or two rooms.”

Once she retired, Nelson heard about an activity called Tablescapes, which allowed her to practice her table decorating skills. After competing in multiple Tablescapes competitions, she soon realized that she could be very happy pursuing this passion as a decorator and designer.

“I’ll arrange for anything you want, so you actually just deal with one person. You don’t have to go to all of those different places. It’s one-stop shopping,” said Nelson.

To officially kick off Cheryl’s Creative Event Designs, Nelson held an open house event in July of last year called “Deserts and Designs,” where she set up sample ta-bles representing many of the events she organizes.

With the open house behind her, she continued to advertise on Facebook and to search for more customers. Her business allows her the opportunity to organize events such as weddings, birthday parties, receptions, holiday events and many others. With an extensive amount of working contacts in the areas of DJ work and photography, and with her personal flair with arranging flowers, Nelson believes she is more than prepared to take on any activity that comes her way.

“It is a lot of work, but I am lucky that I have some really good contacts I can call on. So, if I ever needed that, I’ve got it,” said Nelson.

Nelson makes a point of shopping for her supplies at local shops in Luverne and Greenville to try and restore items to their former glory, or even to use them for purposes sometimes not thought of before.

Nelson hopes that one day her business will be able to grow enough to establish a storefront that could also serve as a venue for events. Until that day comes, she says she will continue to work diligently to build up her business and to help as many people as she can.

“If I didn’t try it, I’d always wonder if I could have done it. I had a lot of people say that I should do something like this for a living, so that got me thinking about it.”

With the new year comes new officials chosen to lead the community of Luverne. In early November of 2015, Alan... read more