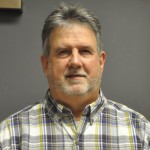 Alan Carpenter was officially sworn in as a council member to represent District 5 at the Luverne City Council meeting Monday night. Carpenter will take the place of Dr. Pat Walker in representing District 5. (Photo by Beth Hyatt)

Carpenter will take the place of Mayor Pat Walker in representing this district, and Walker cannot think of a better man for the job.

“I believe that Carpenter will be a great asset to the city council. He’s very level-headed and very easy going. He’s been in business here for several years, and he’ll bring a business perspective to the council,” said Walker.

Having grown up in the community, Carpenter feels that he has first-hand experience with understanding the needs of the town, and he is grateful for the chance to help the members of his district in any way he can.

“I’m excited to have this close of an involvement with the activities of the city. I’ve always been civic-minded, and I always had it in the back of my mind that I would like to serve and give back to the community that has given so much to me and my family,” said Carpenter.

Carpenter knows that tough decisions lie ahead for he and his fellow councilmen, but he hopes to always be able to have a positive impact on the community as a whole.

One of Carpenter’s main concerns going into office is creating more jobs for the citizens of Luverne and bringing in more industry.

“We need jobs with something above minimum wage. I’ve always said that Crenshaw County, and Luverne in particular, populates the world, because everywhere you go, you find someone who is from this area,” said Carpenter.

He would like to see the community continue to thrive and grow, and he hopes to help make Luverne a place where families will love to stay and financially be able to stay.

Another concern for Carpenter is the town’s safety. While Carpenter believes that currently the town is one of the safest communities he’s seen, he hopes to maintain and grow that level of safety to ensure more residents will want to live in and move to Luverne.

“We have a lot to offer. You want to grow, but you want to maintain safety so that people want to raise a family here. You want young people, that’s where the growth comes from,” he said.

Carpenter gives his thanks to his fellow council members for selecting him for this honor, and he plans to do all he can to maintain the level of success that preceded him.

“I was honored to even be considered. I’m thankful to the city fathers for giving me the opportunity and thinking that I would be good for District Five and the city as a whole,” said Carpenter. “I hope that I can represent my city and my district with honor and integrity, and I will do it to the best of my ability. I can promise them that.”