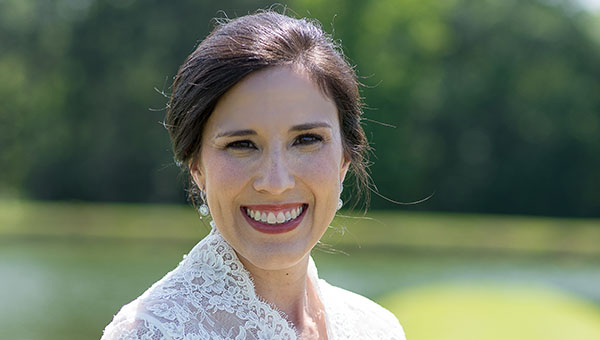 Ellen Crenshaw Johnson and Edgar Rhodes Hauser, III were married on May 30, 2015, at 5:30 in the afternoon at the Farrior Place, the Crenshaw family farm, in Fort Deposit, Alabama.

The wedding was officiated by The Reverend Murray Wesley Lee, Birmingham, Alabama.

The outside ceremony was centered before a large, wooden cross  made by the groom.  Carved into the wood of the cross were the couple’s initials, the date of the ceremony and the Bible verse engraved on the groom’s ring, Philippians 1:3.   The flowers adorning the cross were given in honor of the bride’s maternal grandmother, and in the memory of the couple’s late grandparents, and the late aunts of the groom, Ms. Sydney Rhodes Hauser and Mrs. Ruth Howell Hauser.

Given in marriage by her father, the bride wore her sister’s gown. The strapless ivory silk satin gown featured a fitted bodice with a semi-full skirt and a chapel length train which was bustled. For the ceremony and reception, the bride wore a hip length alencon lace jacket featuring cap sleeves. The jacket was accented with an ivory satin sash tied at the waist.  Her single tier elbow length veil was bordered with alencon lace to compliment her jacket.

The bride’s sister, Elizabeth Johnson Thornley, of Jasper, Alabama, served as matron of honor.  Bridesmaids were Elizabeth Crum Davis and Frances Redden Morris, cousins of the bride, of Birmingham, Alabama; Barton Crenshaw Crum, cousin of the bride, of Montgomery, Alabama; Madelynn Scott Griggers and Sydney Elizabeth Griggers, nieces of the groom, of Glencoe, Alabama.  Also serving as bridesmaids were Katherine Branum Bourne, of Greenville, Alabama; Emily Brown Cotney and Elizabeth Walter Stewart, both of Birmingham, Alabama, and Lucile Waller Rey, of Tuscaloosa, Alabama, all friends of the bride.

Children participating in the wedding were Margaret Hall Thornley, niece of the bride, of Jasper, Alabama; Mary Allison Hayes, goddaughter of the groom, of Birmingham, Alabama; Mary Alton Kenerly, goddaughter of the bride, of Gulfport, Mississippi, and Edgar Anderson Stephens, name sake of the groom, of Demopolis, Alabama.   Program attendants were Marlyn Grace Jackson of Birmingham, Alabama, and Molly Martin Stephens of Demopolis, Alabama, both children of friends of the bride and groom.   Scripture was read by Katheryn Crenshaw Kay, cousin of the bride, of Brentwood, Tennessee.

An outdoor reception followed the ceremony, with music provided by Brother to Brother of Tuscaloosa, AL. The bride’s cake was a traditional five tier vanilla cake with ruffled buttercream icing. It was decorated with a spiral garland of light pink and white tea roses. Three smaller groom’s cakes, in caramel, chocolate, and strawberry, were decorated with fruit and magnolia leaves.  The cakes were made by Shirley Sweeney of Livingston, Al.

The couple left their reception in the same 1959 Corvette convertible the groom’s parents drove in 1967 when leaving their wedding reception.  Following the honeymoon to Greece, the couple resides in Birmingham, Alabama.