It’s a new year, and one long-time fixture of uptown Greenville is opening a new chapter in her life.

Patty Powell, owner and operator of Court Square Café for more than 20 years, has officially retired from the restaurant business.

Running the uptown café hasn’t always been easy, Powell admits. However, she says all the hard work and effort required to run a small family business has been worth it in the long run.

“I’ve had some good help along the way, including my daughter Trish (McCullough), who’s been with me the entire time. The café has done well for my family,” said Powell.

“I learned when you’re having good times, you put some of it back into the business, and some into savings, and that gets you through the hard times.” 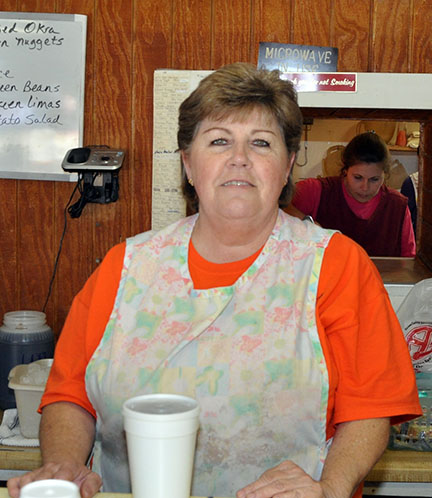 After more than two decades owning and operating Court Square Café, Patty Powell is retiring and plans to use her new-found free time to travel around the U.S. (File Photo)

Court Square Café has become a part of many Greenvillians’ daily routine.

“We were fortunate to have a lot of regulars. There were the guys like Frank Hickman, Steve Norman, Al Brannon, Allen Stephenson and others who came for their morning coffee every day,” said Powell.

“Jimmy Jones would be standing at the door every morning when we first opened up. Charlie and Mary Frances Jones, Brenda and Jim Moody … we had a lot of great regulars, and regulars really matter in this business.”

For Powell, those regulars mattered as more than another ticket for the cash register.

“If I didn’t see or hear from some of my regulars for a few days, I would call them and check on them to make sure they were OK,” she said.

“Most of my regulars did tell me if they are going to be out of town, so I wouldn’t worry. Those folks become friends, become like family.”

Travelers on their way to and from the beach also became Powell’s regulars.

“Those snow birds would come to see us every year like clock-work,” she said.

As for Powell’s menu, she discovered that some dishes simply had to stay in place due to popular demand.

“Banana pudding. Folks just love it around here and I make mine from scratch, no mixes or anything. I tried not having it before, but the customers weren’t happy,” Powell said, adding, “They look forward all week to Friday because it’s banana pudding day!”

Another menu mainstay was Spaghetti Wednesdays.

“People told me they planned on enjoying spaghetti each Wednesday and didn’t have to fix it at home, so I had to keep that in place,” she said.

Powell took special pride in her flaky homemade biscuits, served with country-style breakfasts each morning each morning at Court Square.

“Frozen biscuits and canned biscuits are OK, but there is nothing like a homemade one,” she said.

She admits that saying goodbye to her customers before the café closed for the holidays was a bittersweet time.

“I was happy and sad at the same time, absolutely. My customers were so sweet. They kept saying, ‘Oh, you’re not gonna retire, you’re gonna come back after the holidays,’” Powell laughs.

The former restaurateur has other plans, however.

She is swapping her apron for comfy travel clothes and a chance to see the U.S. via the family RV.

“I’ve always wanted to travel. There’s a whole lot of this country I haven’t gotten a chance to see,” Powell said. “Maine is No. 1—we want to travel up the eastern seaboard—and Montana and Wyoming. Those are the top places. We want to go and see this country while we are still healthy and active enough to enjoy it all.”

“Corinna is going to introduce some new things, like her Philly Steak sandwich, along with keeping some older menu items. The hours will stay the same and some of the same staff will be in place,” Powell said.

“I just want people to give her a chance just as I was given a chance when I took over the business almost 21 years ago.”

Court Square Café, currently closed for renovations, is due to begin its latest chapter on Jan. 11.

Heavy rains during the Christmas holiday left a number of roadways in Butler County in need of repair. According to... read more