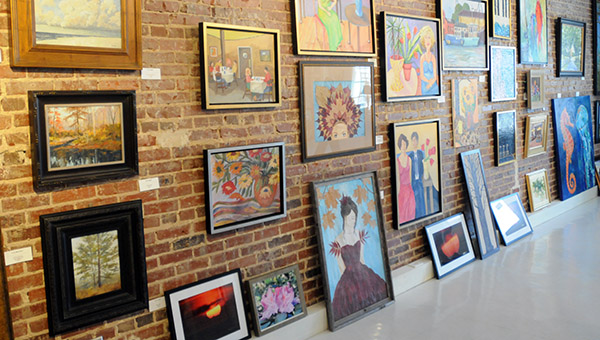 With the turn of the New Year, High Horse Gallery, an art gallery located on Greenville’s West Commerce Street, is closing.

“To those of you who have been supporters of the gallery, I sincerely thank you,” McKinley said.

For the longtime art lover, the gallery, which was housed in the old shoe shop building, was a labor of love.

“Actually, we bought the old shoe shop building with no special plans in mind, other than renovating it and renting it out,” said McKinley, the former owner of First Realty of Greenville.

And then she discovered what was hiding beneath those plain plaster walls.

“I started seeing all this beautiful old brick that had been hidden away and it made me think that we had something special. That this would make a wonderful art gallery,” she said.

A space that was formerly filled with high heels and boots, handbags and cobbler’s tools became home to the creations artists and artisans, some living just a few blocks from the gallery, others an entire ocean away.

“When I made the decision to open the gallery it was almost instantaneous, as a matter of fact, I think I decided in about five minutes to open an art gallery in Greenville, Alabama,” said McKinley. “I always realized the risk associated with an art gallery in a small town such as Greenville, however, I was hopeful that traffic off the interstate as well as a website would make up for the lack of business from the immediate area.”

McKinley said her decision to close the gallery was a difficult one.

“I have always trusted my instincts on business decisions and I feel that at this point in my life this is the right decision for me,” she said. “To keep the gallery open I could change to a co-op or raise the gallery fee, but neither of these options appeal to me. I have never believed in the co-op model. As a former real estate broker I can’t imagine being paid for a service in advance of satisfactory performance, nor do I think I could ever feel comfortable with charging a higher gallery fee, as I feel artists have to give up so much income on the sale of their work under the best of conditions.”

During its two years of operation, High Horse Gallery became a popular destination for art lovers in the area, and also served as the backdrop for a number of events in the community such as the inaugural Southern Social, numerous book signings, and after parties following productions by the Greenville Area Arts Council.

Stacey Edwards, who led several “painting parties” at the gallery, described High Horse Gallery as “a shining light for all things art.”

“The collection (Mary) amassed was one of the most interesting and beautifully presented anywhere! She worked tirelessly to bring art and culture to the lives of Greenville,” said Edwards. “Her door was open to so many charities and people from all walks of life enjoyed her incredible hospitality. The best part was getting to know her as a person and meeting such a kindred spirit. She made me a better artist and a much better businesswoman. For that I am so grateful.”

Those visiting the gallery could view everything from Photo-Realism to Abstract, Impressionist and Outsider art at High Horse. Not only were there a variety of paintings done in oil, watercolor, acrylic, encaustic and mixed media to be found, but pottery, hand-crafted jewelry, fine art photography, gourd art, sculpture, woodcraft and more could be found on display throughout the gallery.

“I wanted to offer a real diversity, so that the ordinary man or woman off the street could walk in here and find something they really liked and could relate to,” said McKinley.

High Horse Gallery hosted a number of exhibits, including one in October for world-renowned artist Nall.

“The gallery was professional — top quality — and you could see the same thing in New York,” said Nall.

McKinley said she will miss going to the gallery and helping artists near and far sell their work.

“I enjoyed the two years and two months,” McKinley said. “I’ll miss it.”